5 Hydrangea Spots in the Chugoku Region

Colorful rainy season splendor in this corner of Japan

The Chugoku region of Japan is famous for destinations like the Tottori Sand Dunes, Shimane's Izumo Taisha Shrine, and the photogenic Tsunoshima Bridge in Yamaguchi. This part of the country also has some great spots to enjoy the best of the rainy season's hydrangeas, and this guide covers five worth checking out if you're in the area.

If you're someone who enjoys finding pockets of tranquility among the hustle and bustle of city life, Gesshoji Temple in Matsue is a great spot to check out. There are around 30,000 hydrangea plants around the grounds, and the best time to enjoy them is during June. Outside that period there is still plenty of other floral beauty to enjoy, including cherry blossoms and azaleas earlier in spring.

An easy five minutes on foot from Suetsune Station, the Mihagino Ajisai Park is home to around 3000 hydrangea plants which fill the grounds with color during rainy season. The park's proximity to the station means you can get some great shots of the flowers with trains passing by in the background, making it a popular spot for photographers.

Often nicknamed as the hydrangea temple, the grounds of Amidaji are dotted with around 4000 hydrangeas in 80 different species. In typical years, a festival is held during the month of June when the flowers are at their best – it has been running since 1991.

Located a 10 minute stroll from Kibitsu Station, Okayama's Kibitsu Shrine has some lovely displays of floral color throughout the year, including springtime cherry blossoms, peonies, and azaleas. After those beauties comes the pièce de résistance – around 1500 hydrangeas that bloom from mid-June to early July.

Located on the premises of the Asahi Confectionery Company, the Kashinoki Ajisai Garden includes an impressive 20,000 hydrangeas covering around 150 different varieties. An annual festival is held at the site when the flowers are at their best, and you can get a feel of what to expect from the video below. 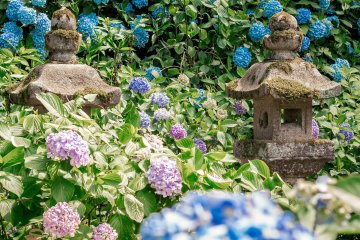 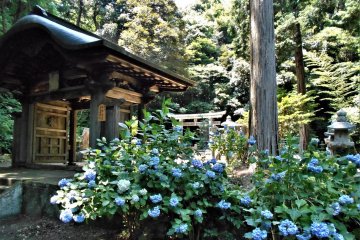