Home to execution grounds and magic stones in Tokyo

With its reminders of Tokyo's pre-economic miracle days, Arakawa City Ward may come across as hardy but the area is home to scores of temples and shrines that reveal moments of the region's history. Home to execution grounds, Edo period religious cults and children-feeding trees, here is an introduction to some of the temples and shrines of Arakawa.

Courtesy of its giant seated bibbed Buddhist statue, Enmei-ji is easily recognisable from the nearby train lines and sits as part of a local cluster of Buddhist temples. Its gruesome history as a former execution ground has given its massive statue the name of the Beheading Jizo Statue with a base surrounded by red cap-wearing jizo statues.

A 2-minute walk from Minami-Senju Station on either the Hibiya, Tsukuba Express or JR Joban lines.

Surrounded by gas holders it may be but Ishihama Shrine is steeped in almost 1300 years of heritage. Once a major Shinto holy site for much of the Kanto region, the shrine is dedicated to Jurojin, the deity of longevity. Sumida River sits right by it and as well as a number of old torii gates, the shrine is home to a fujizuka mound, a relic from an Edo period Mt. Fuji cult.

A 15-minute walk from Minami-Senju Station on the Hibiya, Tsukuba Express or JR Joban Lines.

Flanked by the waterfall Tenno Park on one side and Sumida River on the other, it's easy to imagine Seiganji Temple as a standard Buddhist temple. However, two wooden benches here date from a 1591 tour of the area by the nation's unifier, Tokugawa Ieyasu, while an eye catching mound of stone-carved statues rises up like a miniature mountain.

A 6-minute walk from Senjuohashi Station on the Keisei Main Line.

Home to a huge gingko tree that legend has it feeds children, Susanoo Shrine also has some pedigree, dating back to the late 8th century. The shrine also features master haiku inscriptions, a stone said to emit light from which the gods speak as well as a portable shrine festival in summer that custom says helps to ward off evil and illness from the local area.

An 8-minute walk from Minami-Senju on the Hibiya, JR Joban or Tsukuba Express Lines. 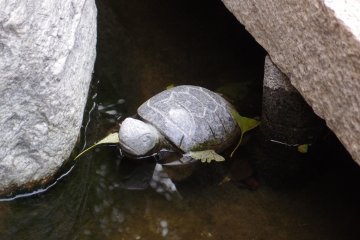