Some of Tama Tokyo's most venerable locations

Anyone seeking a break from brand name Tokyo will feel right at home in Chofu City. The location of some of Tokyo's oldest temples and shrines, the area's history and heritage, supported by a beautiful nature, is on clear display. Here is an introduction to just some of the temples and shrines of Chofu and how to reach them.

Almost stately in atmosphere, Fudaten Shrine is one of the region's oldest, having been originally established in the early 10th century. One of the komainu guardian statues here is thought to be the oldest in the city while the more recent bull statue and kaguraden ceremonial dance platform offers even more interest.

A 7-minute walk from Chofu Station on the Keio Line.

Tokyo's second oldest temple, Jindaiji Temple was originally built in 733. The temple grounds are beautifully landscaped with ponds, carp fish and amazing temple structures including a waterwheel that was once used to create the soba noodles the area is famous for. Surrounded by nature, there is a distinct feeling at the temple of having stepped back in time.

A 10-minute no.34 bus ride from Chofu Station on the Keio Line.

Immediately appealing with its rustic somon gate, Kogakuji Temple sits by its neighbour temples, Chosen-ji and Kakusho-ji, the latter being the resting place of manga artists and historian, Dr Shigeru Mizuki. The main temple building sits back at the end of a long path from the entrance, giving it an almost secretive feeling of isolation.

A 13-minute walk from Nishi-chofu Station on the Keio Line.

Sitting on land surrounded by plenty of space, the weathered but beautiful main building of Shimoishihara Hachiman Shrine has the image of a relic from a bygone age. The komainu lion statues feature suckling cubs while the shrine is home to three traditional shishigashira lion masks that are paraded during sairei religious festivals.

An 11-minute walk from Nishi-chofu Station on the Keio Line. 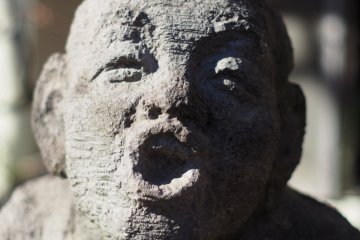