A glorious blend of accessible sophisticated culture and streetwise heritage, Chuo City Ward is home to scores of fascinating destinations and sightseeing locations. Here is an introduction to some of the landmarks and historical spots of Chuo and how to reach them.

Another example of Japan's respect for its railway history and heritage, the Former Hamarikyu-mae Railway Crossing is a remnant of the old freight trains that ran between Shiodome Station and Tsukijishijo Station from 1931 to 1987. Upon closing down, the local residents petitioned to have the signal remain as a reminder of the area's history.

A 6-minute walk from either Tsukijishijo or Shiodome station on the Toei Oedo Line.

If Ginza is the city's luxury high-end shopping home then surely Kabukiza is its cultural soul. One of Japan's three representative performing arts, kabuki is globally recognised and the theatre is the art's centre. Featuring a gallery of kabuki-related props and artefacts, a shrine, as well as the theatre itself, the building is simply stunning.

Direct access from Higashi-Ginza Station on the either the Hibiya or Asakusa lines.

Dating back to the Edo period, the current stone Nihonbashi Bridge, complete with lion and kirin statues and twin arch construction and national zero milestone, is listed as an Important Cultural Property - despite being almost covered over with an expressway. The bridge was first built as a sign of prosperity and the same can be said of the current one.

A 1-minute walk from Mitsukoshimae Station on either the Ginza or Hanzomon lines.

A landmark like no other, the Tsukiji Outer Market is a maze of gourmet history, flavour and buzzing blue-collar bargains. With over 400 stores selling everything from dried squid & bowls of tuna rice to Japanese knives & cutlery, the market has it all. A must-visit location, could easily wander around for a half a day. 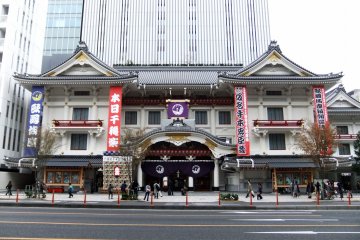