The spiritual centre of Tokyo's rise in affluence

Flooded with cash, 1980s Japan was a supercharged economy that saw the country build almost anything and everything. Laced with wealth, spurred on by the promise that anything was possible, Japan's construction boom touched the entire country.

Huge highway and expressway projects popped up everywhere and one of the most curious of projects was the one that saw the Shuto Expressway being built to literally run above the famous Nihonbashi Bridge.

The bridge is a direct link back to the city's Edo history. The first shogun, Tokugawa Ieyasu, was said to have ordered its construction as a focal point for all of the major thoroughfares leading into and out of the city. Distances throughout the country were measured from the bridge, effectively becoming the nation's cartological zero point. Much like the expressway above the current bridge, Nihonbashi Bridge was an expression of the wealth and authority of the shogunate's new capital, Edo.

The twin arch bridge currently standing was built in 1911, is made of stone and replaced the wooden one that had stood - barring the occasional earthquake and fire - for hundreds of years. So stately in design is Nihonbashi Bridge that it has been designated as an Important Cultural Property.

The bridge features four shishi lions at its corners, ostensibly protecting it from evil, whilst in the centre can be found a kirin statue, a sign of the sense of prosperity that the city was experiencing at the time of its construction over one hundred years ago.

Though the expressway above it may be an eyesore, the bridge itself is not. Nihonbashi Bridge remains to this day the spiritual sign of Tokyo's historical affluence and progress.

Take the Ginza or Hanzomon Lines to Mitsukoshimae Station for a 1-minute walk from Exit B5 or B6. 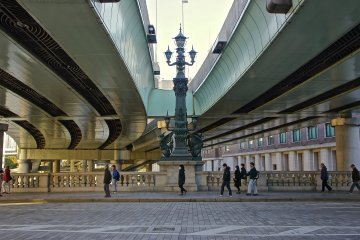 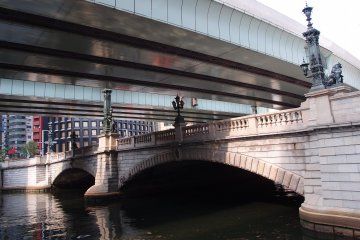 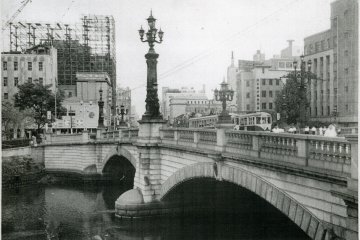