Holy personality in the city

While it may occupy a space that is tiny by most standards, Koami Shrine seems to come alive with character. The shrine's ablution well not only features two vibrantly sculpted dragons offering water, but the statue of Fukurokuju, one of the seven deities of fortune, and the wooden turtle that greets visitors are standouts in personality.

A 4-minute walk from Ningyocho Station on the Hibiya Line.

Massive lion heads at almost two tonnes in weight take centre stage at Namiyoke Inari Shrine. The heads are paraded every three years through the streets of Tsukiji while the shrine itself was erected some 350 years ago when local fisherman sought help from the gods in calming the ocean waves that were wreaking havoc on the area.

A 5-minute walk from Tsukijishijo Station on the Toei Subway Oedo Line.

Not particularly large but immaculately presented, Suitengu Shrine features unique nods to its dedication to conception, childbirth and children. A bronze statue of a dog with pup, symbolising the ease of birth for canines, is surrounded by the twelve signs of the Chinese zodiac while by the ablution well stands a kappa water imp nursing its child.

A 2-minute walk from Suitengumae Station on the Hanzomon Line.

At Tsukiji Honganji Temple, the nation's most commonly practiced form of Buddhism collides head on with the world of multiculturalism. An eclectic design inspired by Indian motifs and featuring European stain-glass windows, German pipe organs and memorials to monks and modern rock guitarists makes this temple unlike any other.

Direct access from Exit 1 of Tsukiji Station on the Hibiya Line. 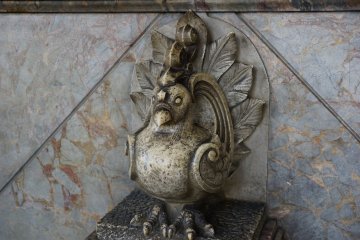