The roar that tamed tigers and dragons

There is nothing like a lion or two to help protect the local fisherman from the madness of the ocean. Thus it was that Tsukiji, being built on reclaimed land way back when, being tormented by the crashing waves that destroyed the efforts of the workers and engineers of the time, found its saviour.

The local Shinto priests floated an image of the deity, offered their prayers and the waves stayed put. Miracles abound in the world of faith, the land was reclaimed and a shrine erected in gratitude to the gods for their help.

To this day, surrounded by grey concrete, industrial warehouses and a distinct behind-the-scenes work ethic, Namiyoke Inari Jinja in Tsukiji retains its blue collar feel. Seen making brief stops at the shrine - the lion's roar is said to tame the tigers and dragons that rule the wind and clouds - local workers pray for continued protection, good fortune and safe travels.

Every three years in mid-June, a full mikoshi portable shrine festival is held and the two lion heads sitting at the shrine are paraded throughout Tsukiji. The brown head of the lion weighs a jaw dropping one metric tonne. The red head of the lioness comes in at 700kg. It takes some effort to move those two around...

Dotted throughout the shrine can be found numerous tsuka, stone sculptures erected in gratitude to that which is of value to those working in the area. The famous tamagozuka egg sculpture sits right by the lioness' head while peering around, you'll discover more tsuka dedicated to, among other things, sushi and shrimp.

Namiyoke Inari Jinja is an honest, down-to-earth expression of faith and gratitude. The gods seem to have heard the pleas of the people all those centuries ago and to this day, the hard working men and women of the area respond in kind. 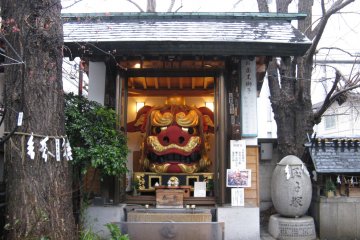 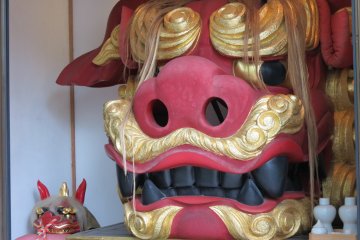 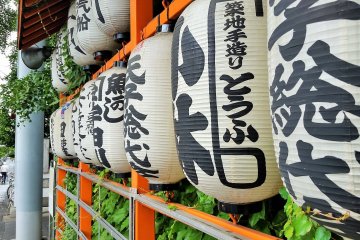 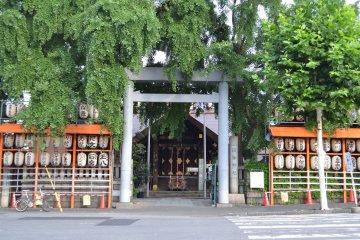