Small Fussa City may be but that doesn't stop the city from featuring a nice variety of public spaces. The Tama River running along its wester border, naturally offers the most in terms of parks with the locals - and visitors - take full advantage of the water views and fun. Here is an introduction to some of the parks of Fussa and how to reach them.

A simple open space used to clear the head or take the dog for a stroll, Haragayato Donguri Park is home to a walking path that takes visitors around and through the park's several sections. As its name would suggest, scores of donguri acorns can be found strewn around the grounds.

A 6-minute walk from Ushihama Station on the JR Ome Line.

A small nature reserve, Hotaru Park was named for its resident fireflies. In the early 1970s, a greenhouse was established to help reverse the declining firefly population and now, the park plays host an annual firefly festival in summer. The wooden walkway that takes visitors through the park adds a nice rustic touch.

A 9-minute walk from Kumagawa Station on the JR Itsukaichi Line.

Sitting right along the banks of the Tama River lies the popular green space that is Tamagawa Central Park. Full of space, picnic benches and even a water play area for the children, the park's is an obvious draw for the locals, whether it's to celebrate the springtime cherry blossoms or to enjoy the river views and atmosphere.

A 10-minute walk from Kumagawa Station on the JR Itsukaichi Line.

Another river bank-inspired natural spacer, Tamagawa Ryokuchi Fussa-Minami Park sees the Tama River lying along its southern border. The park itself features many cherry blossoms, lots of river views as well open space for BBQs and picnics. Some children's play equipment feature but it's the natural atmosphere that appeals here.

A 15-minute walk from Hajima Station on the JR Itsukaichi, JR Ome or Seibu Hajima lines. 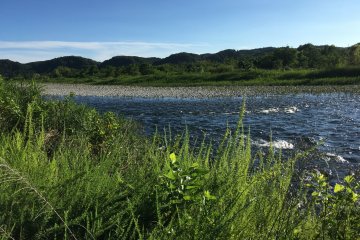