Weeping trees and yes, the god of the underworld

A beautiful nature and a rich history combine to make Hinode Town a unique place to visit. Far enough away from central Tokyo to make you forget that you are still in the capital, the temples and shrines in this small town feature a number of culturally recognised assets as well local places of piety existing without glamour. Here is an introduction to some of the temples and shrines of Hinode and how to reach them.

Originally built in the 15th century, the full name of Hokotoji Temple is Shiosawayama Hokoji and is highlighted by a truly giant daibutsu statue of the seated Buddha. Larger than its more famous sibling in Kamakura, the stature was named Rokuya Daibutsu in honour of where the Buddha's awakening is said to have occurred.

A 9-minute no.22 or 27 bus ride from Musashi-Hikida Station on the JR Itsukaichi Line.

Hidden behind the traditional image of the sanmon entrance gate sits Hosen-in Temple. And within the temple lies a statue designed as a Tangible Cultural Property of Tokyo. The late 15th-century wooden statue of Enmao, lord of the underworld, features a calmer face than the enraged countenance of similar statues.

A 6-minute drive from Musashi-Hikida Station on the JR Itsukaichi Line.

Perhaps befitting its location in far off rural Tokyo, Ichinogo Shrine is an experience. No fanfare here with the terraced stone bulwark-like walls reminiscent of feudal castle ones, the moss-covered torii gate hearkening back to a more ancient time while the shrine itself, wooden and worn, calls up the image of gods.

A 16-minute no.20 or 21 bus ride from Musashi-Itsukaichi Station on the JR Itsukaichi Line.

Aside from the lovely shrine building, ablution wells and torii sacred gate, what separates Sachigami Shrine from others is its weeping Japanese hornbeam. The tree, designated as a National Monument, is said to have been found growing on a mountainside and its knotty and gnarly trunk is a sight most curious.

A 6-minute no.20, 27 or 30 bus ride from Musashi-Itsukaichi Station on the JR Itsukaichi Line. 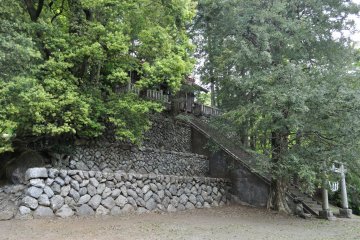