Time travel to the Edo era in Chiba Prefecture

If you’re looking for relics of Edo, the old capital of Japan, of course, you can find classic merchant houses, splendid shrines, and centuries-old temples in Tokyo. But much of the antique character has been lost to disasters, conflicts, and the march of time. To catch a glimpse old Edo visit Katori City, only an hour from Narita Airport, but centuries away from modern Tokyo.

Katori City incorporates the old town of Sawara. This prosperous town was described in song as Edo masari, exceeding Edo because of its strategic and mercantile power. The town thrived as a trade center on the Tone River and stop on the way to Katori Jingu, one of Japan's historical grand shrines.

Lining the banks of the Ono River are rows of preserved merchant houses. In front of the shops, you'll spy rows of steps leading to the river where boats once ferried goods to the capital. These days, boat tours carry visitors along the river for a leisurely look at the once-bustling merchant town’s heritage townscape.

One of Japan’s earliest geographers, Inoh Tadataka, undertook a project to map all of Japan. His precision maps won him the distinction of national treasure of Japan. Drop by his former residence on the east bank of the Ono River and across the river the Ino Tadataka Museum dedicated to his exacting cartography.

Sawara is known for its annual festivals held in the summer and autumn. At Sawara Dashi Kaikan any time of year, visitors can see a rotating exhibit of towering floats constructed of zelkova wood and bearing legendary figures.

Kanpukuji, a Shingon Buddhist temple with millennia of history, is one of the three Kanto region Daishi temples, along with Kawasaki Daishi and Nishiarai Daishi, petitioned to ward off evil. Kanpukuji is noted for its seasonal colors in spring and autumn.

Yasaka Shrine close to Sawara Station was modeled after the shrine of the same name in Kyoto. The shrine participates in the summer Gion Festival. Suwa Shrine, also a short walk from the station, is the focus of the autumn festival.

The shrine that lends its name to the city is Katori Jingu, one of the three historic grand shrines of Japan. The shrine grounds sprawl over a rolling landscape with many subsidiary shrines, bamboo groves, forests, and period architecture.

The northern part of Chiba Prefecture is known for its unagi, eel dishes, and Sawara has helpings of this popular dish. At Koboriya, a Meiji era shophouse, you can enjoy a heaping serving of soba noodles. On your stroll, you can pick up some sweets at traditional confectioners and savor sake, another local product with a long history in the region.

Sawara Ayame Park Iris Festival in June features boats plying the rivers, acres of iris flowers, and many other events.

The biggest festivals are Sawara Taisai, a pair of festivals recognized as UNESCO intangible cultural heritage, held in July and October. Gorgeous dashi floats are paraded around the city for three days and nights. 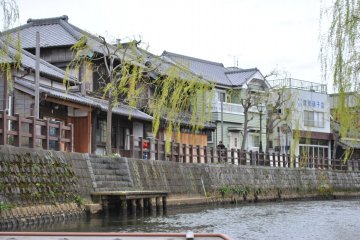 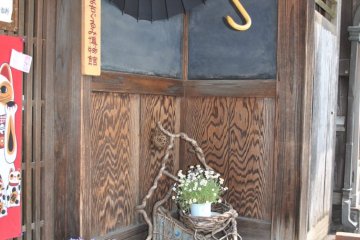 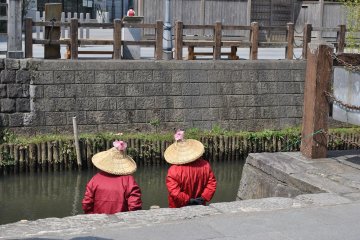