Tokyo's recognised home of old time charm and retro vibes, the museums and galleries of Katsushika City Ward feature a focus on some of the most cherished memories from the nation's post-war period. Hidden amongst them can also be found a burst of contemporary thought and design. Here is an introduction to the museums and galleries of Katsushika and how to reach them.

An ever evolving private art gallery, Atelier 485 is the contemporary complement to the city's infatuation with the past. An open space for artists to collaborate, the gallery is home to numerous exhibitions throughout the year. Displaying works of all genres and from artists around the world, the gallery is a slice of the global in downtown Tokyo.

A 2-minute walk from Shibamata Station on the Keisei Kanamachi Line.

The city cements its position as a retro haven with the joy that is the Shibamata Toy Museum. Housed on the second floor of a cheap candy store, this labour of yesteryear's love is filled to the very brim with toys from the good old days. Be careful though as the museum is only open on weekends and public holidays.

A 1-minute walk from Shibamata Station on the Keisei Kanamachi Line.

If the area couldn't enrich itself any further with retro love, along comes the much beloved Tora-san Memorial Museum. Paying homage to Japan's long running series Otoko wa Tsurai yo (It's Tough Being a Man), the museum features actual props and sets from the show, recreating a delightful old-world charm for only a JPY500 admission.

A 7-minute walk from Shibamata Station on the Keisei Kanamachi Line.

Part of the complex housing the Tora-san Memorial Museum, the Yamada Yoji Museum is dedicated to film and TV director, Yamada Yoji. The JPY500 admission fee gives entry into a museum that, while small, is extremely modern, bright and filled with memorabilia from the continuing career of one of Japan's most loved figures.

A 7-minute walk from Shibamata Station on the Keisei Kanamachi Line. 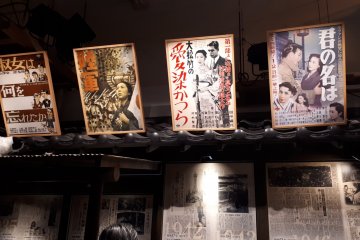