Wildly popular courtesy of its world famous Ghibli Museum and Inokashira Park, Mitaka City is also no slouch when it comes to interesting temples and shrines. Warrior tragics, jealous gods and power stones, the city has it all. Here is an introduction to some of the temples and shrines of Mitaka and how to reach them.

Ikion Temple immediately catches the eye with its two extremely muscular nio guards standing in wild repose outside the entrance gate. Inside, aside from the intricate landscaping details, visitors will find an impressive Fudo-myo statue holding a bronze-coloured blade and surrounded by a similar coloured flame.

A 20-minute walk from Mitaka Station on the JR Chuo Line.

Set in the classic aesthetic of the Inokashira Park pond, Inokashira Benzaiten Temple is dedicated to the deity, Benzaiten. Legend has it that the goddess, despite being the deity for water, music and love, is a jealous one, cursing couples who row out to this 12th century shrine across the park's beautiful pond waters.

An 8-minute walk from Kichijoji Station on the JR Chuo Line.

Established in the mid-17th century as a result of a large fire that engulfed the area, Mitaka Hachiman Dai Shrine cultural curiosities included being the location for the men of the local village to engage in bouts of strength with a lifting stone. The two-storied romon gate is amazing while a sacred tree is recognised by the city.

A 15-minute walk from Mitaka Station on the JR Chuo Line.

A world away from the tourist trade lies Ryugenji Temple. Simple but pleasing to the eye, the temple's main claim to fame is its proximity to the birthplace of the famed late Edo period swordsman, Kondo Isami. Fate was not kind to Kondo and visitors to the temple will pay their respects to this man who fought valiantly for a lost cause.

A 14-minute walk from Tama Station on the Seibu Tamagawa Line. 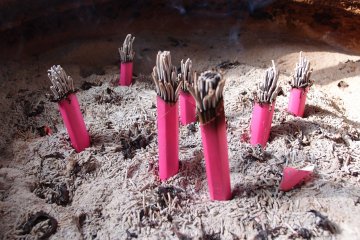