The northern part of Chiba Prefecture stretching from what is now Noda City in the north to Funabashi City on Tokyo Bay was once part of Higashi Katsushika District. The district name, often abbreviated to Tokatsu, remains in titles of events and names of public buildings. The area is home to open many wide-open spaces where you can see the sky, feel the breeze, and take in natural beauty and cultural experiences. These places are seldom as crowded as famous spots in Tokyo, but the views of seasonal flowers and foliage are no less beautiful.

A first glance, the center of Kashiwa City around Kashiwa Station on the Joban Line looks like any other dense suburban town. But don't let that fool you. The villages and towns that were incorporated into the city in the early 2000s retain their charm. Akebonoyama Agricultural Park has an ancient grove of cherry trees and wide fields of seasonal flowers. The garden has some surprising contrasts - a Dutch windmill at the pond, and a traditional Japanese strolling garden with a tea house. For day-trippers, there are lots of picnic spots, a barbecue rental, a tea house, and a canteen.

A 15-minute walk from Kashiwanoha Campus on the Tsukuba Express Line is Kashiwanoha Park. Avenues of tall trees, spaces to stretch out, play, and picnic make this a good family destination. Visitors can boat on the pond, barbecue, lounge on the grass, or stroll along paths and through rose gardens. A highlight of the park is Shohakutei Tea House with an elegant garden, formal tea ceremony, and casual matcha.

Noda' CIty's Shimizu Park centered around 14th-century Konjoin Temple, is probably the oldest park in the region and is widely known for its scenic beauty. Gnarled plum trees bearing sweet-smelling blossoms in February, the sprawling cherry tree in front of the rectory, a grove of dozens of varieties of azaleas, and massive fragrant olive bushes beautify the park. Besides all the natural splendor, the park boasts one of the biggest field athletics courses in Japan.

Named after the beloved author Hans Christian Andersen, Funabashi Andersen Park celebrates the sister-city relationship between Odense, Denmark, and Funabashi City. The 37-hectare park has a village that reproduces the atmosphere of Andersen's 19th century home town surrounded by fields of flowers and a farm landscape. For families with children, it's a wonderland with a waterpark, a challenging field athletics course, a petting zoo, and a museum where children can try their hands at arts and crafts. 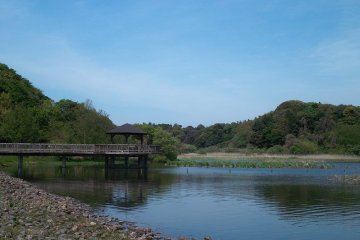 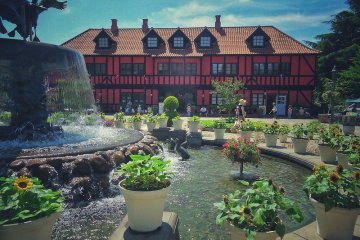