A taste of some of the local foods of Yamaguchi

The unique dishes of Yamaguchi prefecture combine a wild heritage with a natural bounty to create a cuisine that is actually quite adventurous. After all, any region that can offer a poisonous fish as a world famous delicacy, make a perfect meal out of throw away roof tiles and elegant green tea flavours as well as idealise mountain bandit food and cute sushi cakes, must be worth exploring. Here is a simple guide to some of the regional cuisine of Yamaguchi.

Relishing the romantic image of the old mountain bandits that once preyed on travellers, restaurants in Yamaguchi serve sanzoku chicken, a tender thigh cut skewered, grilled over charcoal flames and covered with a slathering of sauce . Eaten off the stick, the idea is to replicate the wild eating habits of the Yamaguchi mountain bandits.

By far Yamaguchi's number one dish, fugu is the world's most famous edible poisonous fish. Eaten in any number of ways, fugu is generally considered at its best when served as sashimi. In Yamaguchi, fugu is pronounced 'fuku' which means happiness, a measure of just how proud the local people are of the fish here.

Usually made in a massive single cake, Iwakuni sushi is a multi-layered sushi rice dish that is then cut into smaller edible portions for serving. Each layer of this dish is colourfully decorated with fresh toppings like shrimp, egg and vegetables. Slightly sweet in flavour, Iwakuni sushi not only makes for tasty eating but is also delightfully picturesque.

Green tea soba noodles served with eggs, beef and vegetables, kawara soba is plated atop a heated roof tile. Uniquely Yamaguchi, this dish stems from the Satsuma rebellion in the late 19th century. Soldiers, waiting each other out during the battle, would use heated roof tiles to cook their foods in what has now become a signature dish of the prefecture. 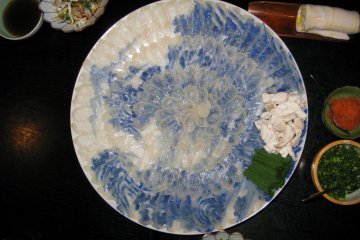 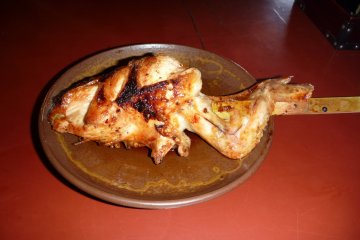 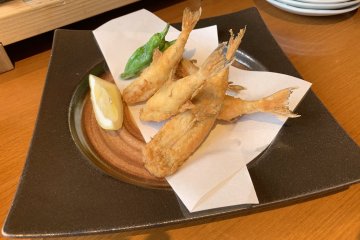 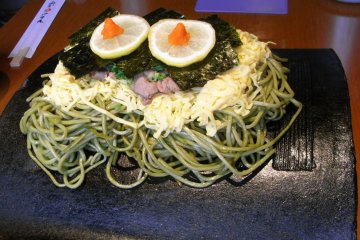