Steeped in surprising history and heritage

The massive vermilion torii gate of Hataoka Hachiman Shrine sets the tone for this solid shrine. Said to have been established in the early 11th century, the shrine is known for its mikoshi portable shrines and popular festivals, even the kaguraden structure sees good use with traditional ceremonial plays performed here.

A 1-minute walk from Ebara-machi Station on the Oimachi Line.

A representative of the depth of the city's religious culture, Honsenji Temple is home to a score of spiritual rituals and ceremonies. The 108 rings of its bell and the burning of lucky charms over New Years as well as firewalking in September are some of the more famous ones while the temple's seated bronze jizo statue is another highlight.

A 1-minute walk from Aomono-yokocho Station on the Keikyu Main Line.

Part of a strong cluster of temples near the station, the highly photogenic Seiko-in Temple stands out with its beautiful Zen-style landscaping. Surrounded by the city's modernity, the shrine's structures, which include an elegant tea room and a powerful black entrance gate, really do offer up a proper sense of heritage and history.

A 7-minute walk from Shimbamba Station on the Keikyu Main Line.

Home to a fujizuka miniature version of Mt. Fuji, Emperor Meiji declared the popular Shinagawa Shrine as one of the top ten shrines of Tokyo. The shrine's dragon-decorated torii gates and the elaborate entrance to the fujizuka are particularly interesting as well as the view from the mini-mountain's 15-metre summit.

A 1-minute walk from Shinbamba Station on the Keikyu Main Line. 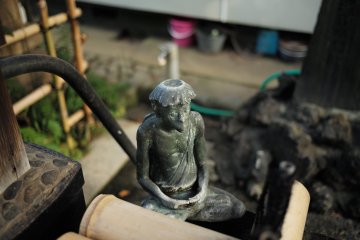