Packing a punch in tiny Tokyo

Tiny it may be but Sumida City Ward packs a quality punch when it comes to historical sites and modern sightseeing. The temples and shrines in the area evoke traditional Edo period culture and heritage, making them fascinating places of interest. Here are a just a few of the many temples and shrines in Sumida and how to reach them.

The first ever match of spectator sport sumo was staged here and during the Edo and Meiji periods, Eko-in Temple became the centre of sumo. A sumo monument known as the Mound of Power is a magnet for new rikishi wrestlers who come to pray for good fortune. Interestingly, a prayer hall exists here for the souls of dead animals.

A 5-minute walk from Ryogoku Station on the JR Sobu Line.

By the banks of the Sumida River, the worn, weathered and aged turtle statues here at Sumidagawa Shrine strike an interesting image. Despite being surrounded by water pumps and sports fields, what sets this shrine apart as the location in a famous ukiyo-e print by the master Edo period artist, Hiroshige Utagawa.

A 12-minute walk from Kanegafuchi Station on the Tobu Skytree Line.

Despite being established some 500 years ago, Takagi Shrine appeals with its local vibe and striking purple colouring. A camphor tree stands within the grounds while next to it sits the Musubi-ishi, or Knot Stone. In typical Japanese fashion, a pile of stones shaped as rice balls - also known as musubi - now sit at its base.

A 5-minute walk from Hikifune Station on either the Tobu Skytree or Kameido lines.

Established in the 10th-century, Ushijima Shrine is home to an uncommon three-gate torii made out of wood. Further cementing the curious tag are the oxen guardian statues rather than the more common foxes or lions. There is a healing tradition at the shrine that sees vworshippers rubbing an ox statue in order to cure illness.

An 8-minute walk from Honjo Azumabashi on the Asakusa Line or Tokyo Skytree Station on the Tobu Skytree Line. 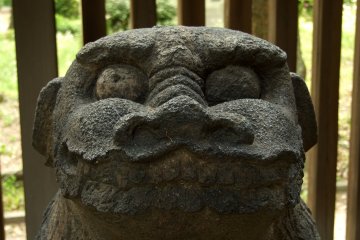