Tasting Across the San’in Region

Many people travel to various regions of Japan just for the food, and the San’in Region is no exception. With each region featuring its own local delicacies, here is a list of five gourmet dishes to try as you taste your way through the San’in Region.

Cattle were introduced to Tottori Prefecture during the Edo period and raising cows has been a practice passed down through many generations. When it comes to wagyu (Japanese beef), the majority of it comes from Tottori. Tottori wagyu contains a high concentration of oleic acid giving the meat an almost melt-in-the-mouth texture. Tottori wagyu has been deemed so delicious that it was selected as the “Best Wagyu in Japan” in 2017. While wagyu is typically eaten as steak or yakiniku, Tottori is known for its shabu shabu style, which is said to give a more pure and rounded flavour.

Nijisseiki (20th Century) pears are the golden fruit of Tottori. With its almost translucent yellow-green skin, refreshingly sweet juice and crisp texture, it is no wonder Tottori produces the largest number of pears in Japan. When people think of Tottori cuisine, they often think of the pear. It is so famous there is even a museum there dedicated to the fruit! August and September are the prime pear-picking seasons when farms are packed with visitors ready to pick their ripe golden treat. We also recommended trying the pear flavored soft-serve ice cream made using the local fruit that can be found throughout the prefecture.

While there is a variety of soba (buckwheat noodle) throughout the Shimane Prefecture, it is Izumo soba that is particularly renowned as one of the three major types of soba in Japan alongside rival Wanko soba of Iwate and Togakushi soba of Nagano. What makes Izumo soba different is that the buckwheat flour used to make the soba is made from seeds which have not had the husk removed, giving it a darker appearance and stronger flavor. Containing more nutrients, it also adds a health benefit to this classic dish. The best time to eat Izumo soba is just after the seed harvest in November – there is even a festival around this time to celebrate the soba seed harvest.

There are two typical ways in which the Izumo soba is eaten, one which is called Warigo, served in three-tier round-shape lacquerware and eaten together with the sauce and a variety of toppings. The other way is called Kamage, which is served in a bowl with broth where sauce is added to your liking.

Snow crabs caught in the Tottori area are called “Matsuba crab”, but only if they are male. The crabs gain their flavor because of the environment of the sea they are living in; the plankton-rich seafloor of the region results in the crabmeat being packed with flavor. Although Hokkaido is the most famous producer of crab in Japan, Tottori actually produces the most volume of crab in all of Japan. The best time to enjoy the rich flavor of the Matsuba crab is from November to March and is delicious whether boiled or grilled. 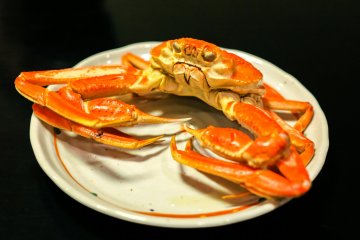 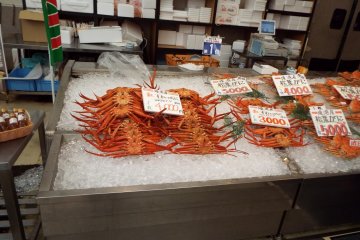 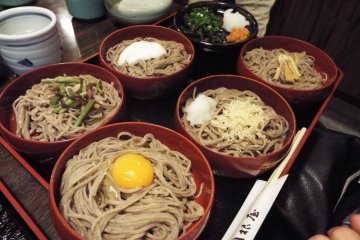