Takasaki koen - get out of the city and into the park

Parks are seldom used in Japan the way they are in other countries. You’re more likely to find them home to sedate dog walkers, or people jogging through, than groups of friends picnicking, reading or sunbathing. But if you’re pining for some fresh air, or you realized you haven’t crawled from beneath the confines of your kotatsu for anything other than cup noodles for several weeks, it’s time to get out and hit up some of Japan’s parkland spaces.

Japan is home to some of the most beautiful, tranquil and uncluttered parks on earth.

Relax on a bench and admire the ponds, packed with enormous koi carp of all shapes and sizes, or take a stroll around English rose gardens and carefully laid out flower beds. Some parks, particularly in the bigger cities, are even home to season-round food stalls, the likes of which only usually appear fleetingly at festivals. Get your hands on some takoyaki (fried octopus balls covered in a delicious sauce), ice cream or yakisoba any time of the year.

Takasaki koen is a small haven only a ten minute walk from the west side of Takasaki station. If you look for the city hall (the tallest building within eyesight) and head towards it, the park is just off to the left.

The park often hosts festivals, markets, and of course the annual favorite event: hanami. In cherry blossom season, people flock to the park and sit beneath the canopy of pink and white falling leaves, eating, laughing and drinking with friends late into the night. Lanterns are strung between the trees so that the entire park is lit by a glow of pink. The front of the park is bursting with food stalls and incredible sights and smells as people hold barbecues and get merry on their multicolored tarpaulins, creating the vibe of one enormous street party where no-one is unknown.

Even if the sakura trees are not in bloom, come here and sit beneath the trees, take a walk around the stunning fountain and water features, or take a peek in the small animal sanctuary, home to a few dazzling and majestic peacocks. You can even stroll around a traditional English rose garden, or bring kids along and play on the swings in the park. It’s very rarely crowded so if you’re seeking some tranquility this is an ideal place to go alone for a stroll. I’d also recommend heading straight for the back of the park and getting a view of the city and the giant statue which looks out over Takasaki city.

Often, when visiting the park with friends, we have been lucky enough to spot a few of those sights which make life in rural Japan the basis of our funniest memories. We’ve seen spontaneous dance performances, music videos being made, wedding pictures being taken, and people pushing dressed-up dogs around in prams.

(Please note: sightings, although likely, cannot be guaranteed. You may even be able to add to or outdo this list!)

There aren’t any restaurants particularly close to the park but from the west side of Takasaki station en route there are a few good places to stop off, including a small thai restaurant, yakiniku, a British pub which does traditional fish and chips, New Zealand pies and happy hour from 5-7pm with 500 yen beers, Tullys coffee and several Japanese restaurants. 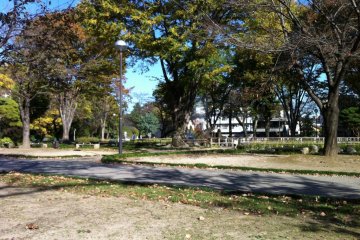 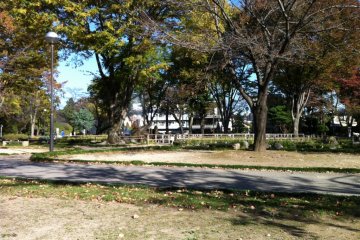 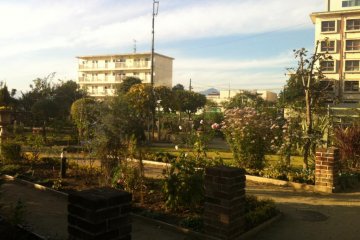 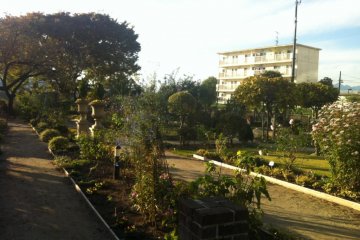