Artist Ikuo Hirayama was born on the Island of Setoda in 1930 and throughout his travels always claimed that his "favorite scenery is always mountains, the sea and a set of islands. I was greatly influenced by my home town (of Setoda)." Having attended junior high school in Hiroshima he was present at the time of the Atomic Bomb blast. In later years he suffered from the after effects of radiation and the experience also had a profound effect on his art work. He began to paint artwork which portrayed his hopes for peace. The museum itself is located not too far from the Kosanji Temple, another site in the area of Setoda definitely worth visiting.

Upon entering this museum I was greeted warmly by the receptionist who had quite a good level of English and handed me an English information leaflet (which unfortunately was slightly out of date but informative none the less). Walking down the hallway towards the exhibition rooms the hall was lined with lovely paintings done by local children depicting not only themselves and their friends but also their favorite parts of the island.

Outside every room is a large sign which tells you about the different stages of Hirayama's life. The English translations detail Hirayama's early childhood experiences through to his acceptance into the Tokyo School of Fine Arts. Then there is information about his efforts tirelessly preserving artwork which was his focus later in his career.

Exhibited in the museum are many of his most famous paintings and even works from his early childhood. Looking at drawings and paintings he did when he was just a child, and then as a teenager, I was astonished to see the level of talent he had even from an early age. At a time when most kids are concerned about school, friends or sports he had mastered techniques of light, shade and depth that many people twice that age would still struggle with. As someone who studied art in school, I could appreciate his skill level and I was more than a little envious of his capabilities as a young artist.

The following rooms show paintings from his later career including those of scenes from the Silk Road- a place he journeyed to more than 120 times in his life time. The texture and colours in these paintings were captivating and some paintings were big enough to cover entire walls. For those with a good level of Japanese, there is a theater which shows several short movies of the artist, played on a loop, each focusing on different aspects of his art.

The souvenir shop had many lovely prints of his work, postcards and other small bits and pieces which were quite reasonably priced. The cafe however was a tad on the expensive side so we did not enter despite having a 10% discount included from our ticket.

This is a really lovely museum of works from a very gifted artist and I would highly recommend visiting, particularly to those who love art. 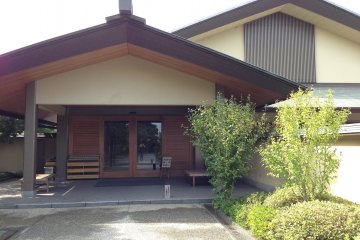