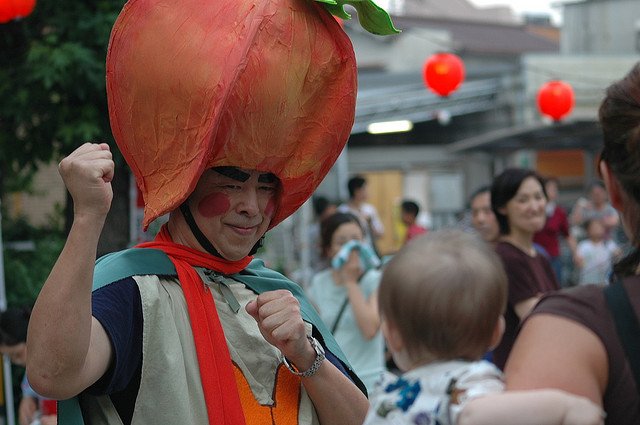 On the 3rd weekend of July each year, a festival is held in celebration of the mysteriously beautiful "Hozuki" red Chinese lantern plant in the small suburb town of Ushita in Hiroshima city, Japan. Located a short bus ride (#6) from the city center, this festival is held along the pedestrianized main street in front of Ushita elementary school. Although many of the city's main festivals are held around this time of year this smaller festival has a fun, relaxed and friendly vibe.

Many of the festival goers wear Yukata summer kimono in the same fashion as the larger Tokasan or Ebisu-ko festivals, but you will find it much easier to get through this suburban crowd and the lines are not half as long for games, drinks and food. There are also performances held at the different ends of the street. At the last festival, one stage had hip-hop dancing and Taiko drumming performances as well as a children's Yukata contest. The other end didn't have a raised stage, but live bands were playing in a roped off area. One classic 50's rock n' roll had the crowd jumping and dancing along with them- it was great fun.

There are lots of fun activities for kids to play, eat, perform and do as a fair bit of organisation is done by the biggest daycare and kindergarten in Ushita, Komyo Hoikuen. There are 100 yen game stalls for kids, plenty of great festival food as well as international dishes like curry and nan from the local Indian (Rhada Villa), homemade donuts from the tea shop and bakery (Kashinoki), Chichimi from the local Korean restaurant, English style meat pies from an ex-pat vendor as well as the usual festival fare: noodles, okonomiyaki, corn, cotton candy, popcorn, corn dogs, takoyaki and more. The kids also love the festival mascot "Hozuki-Man" who you will see walking through the festival posing for photos and shaking hands. It is completely silly, but he does add a bit of fun to the festival and everyone seems to love shaking hands with him as we walks around. The beautiful Hoozuki Chinese lantern plants are also sold at the festival and many people are also carrying them around.

On stage, there is usually a super-enthusiastic Soran team that do their traditional "Soran" dance that has become a crowd pleaser at most Hiroshima festivals. There is also a fun 50's style band called the "Monotones" who reminded us last year that rock and roll is still alive and well! This band are regulars at Memories 1950's style entertainment-bar in the city.

The Hiroshima J-pop sensation MMJ always gets a large group of Otaku fans as well as starstruck youngsters wanting to see their favorite idols. There was a Yukata (summer kimono) contest for kiddies and a couple of Taiko drum performances from Ushita's Taiko group. There was also a belly-dancing performance and some years there is Hula or Flamenco as well representing the most popular dance class groups in the city.

As Ushita is a popular area for international residents of Hiroshima city to settle, there is also a melting-pot type of community feeling at this festival- which is quite a positive and unique feature. There are non-Japanese stall sellers, performers and festival goers mixed into the crowd. This really has become a relaxing and fun event to be a part of, whether or not you are originally from this neighborhood.