The focal point of sightseeing to Miyajima island

About 3 million people a year come to see Itsukushima Shrine and its huge "floating" torii gate on the sacred island of Miyajima.

Although a shrine is said to have been here for over 4000 years, the shrine in the form we see today was first built in 1168 by the powerful warlord Taira-no-Kiyomori. Reconstructed by Motonari Mori in 1571, the present structure retains the earlier Heian architectural style with its graceful, curved lines and details which you can see throughout the buildings. Read more about the history of the buildings and architecture style on this Miyajima tourist page.

Over the years, it has been rebuilt due to damage of fire, storms and battle. There is still a significant amount of maintenance that needs to be done to keep it looking so beautiful despite battling the elements each day. It is amazing that of the many times I have visited the island and viewed the shirne, I have never seen it under scaffolding for repairs.

There are conflicting stories about why the shrine was built over the sea, but for whatever reason, it is a stunning sight. The reflection of the shrine in the water makes for beautiful photographs especially in the early morning light or at sunset.

It is possibel to enjoy many beautiful views of the shrine from the areas around it. However, if you have time, pay the entrance fee and enjoy the serenity of walking through the many passages of the shrine buildings.

Take your time wandering through the corridors and viewing the shrine from its many different angles with different backgrounds of forest, water and adjacent shrines, temples and the 5 story pagoda. Take in the curviture of the rooftops, doorways, lanterns and every last detail.

While walking around, you might notice a ceremony going on for a newborn baby, or a wedding couple might be going through the traditional wedding rites. The priests are often busy conducting a ceremony with chanting and doing blessings over people. This is all part of a normal day at this famous shrine and is an interesting aspect of Japanese culture to witness. Many festivals and events can also be seen at this shrine at certain times each year.

At the end of March, the Kiyomori parade and festival is held when many children and adults dress in traditional Japanes costumes and parade from the ferry port through Itsukushima shrine, ending at the Kiyomori shrine.

In April, the Toka Peach festival is held and in October, the Kikka Chrysanthenum festival. Both are held at the Itsukushima shrine showcasing traditional intricate court dances in spectacular costumes and ornate masks. Other events where you can see these court dances are held at this shrine 4 times in the first week of January, in the middle of May, beginning of June, end of October and again at the end of December. 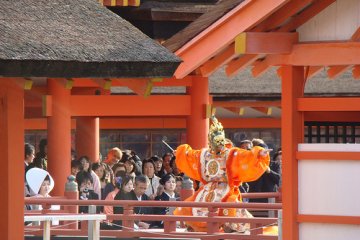 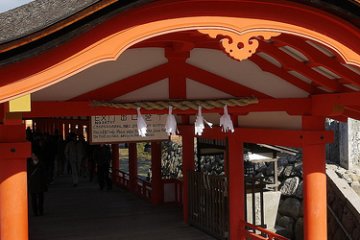 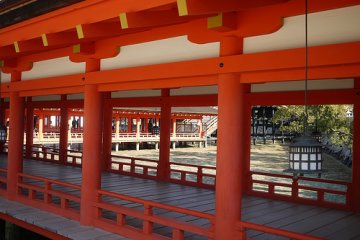