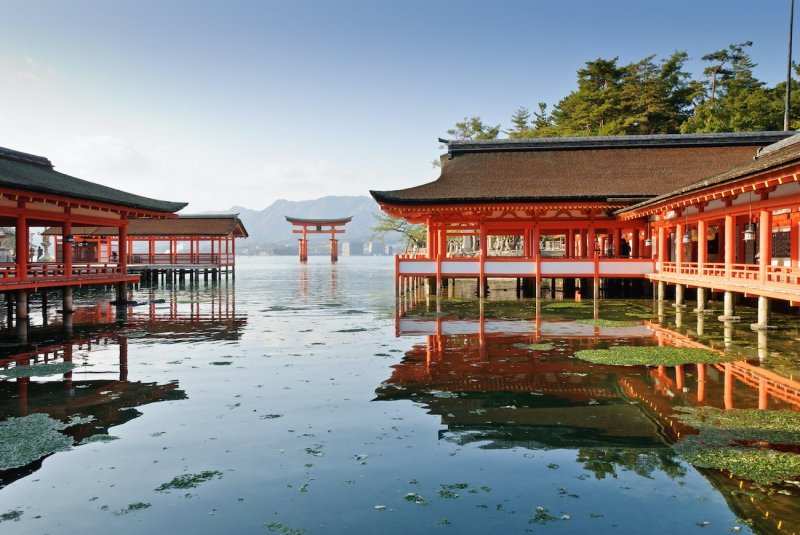 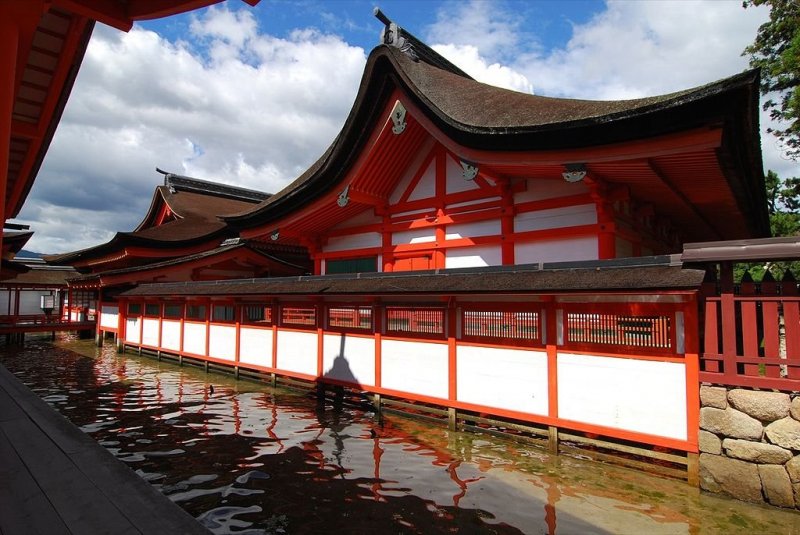 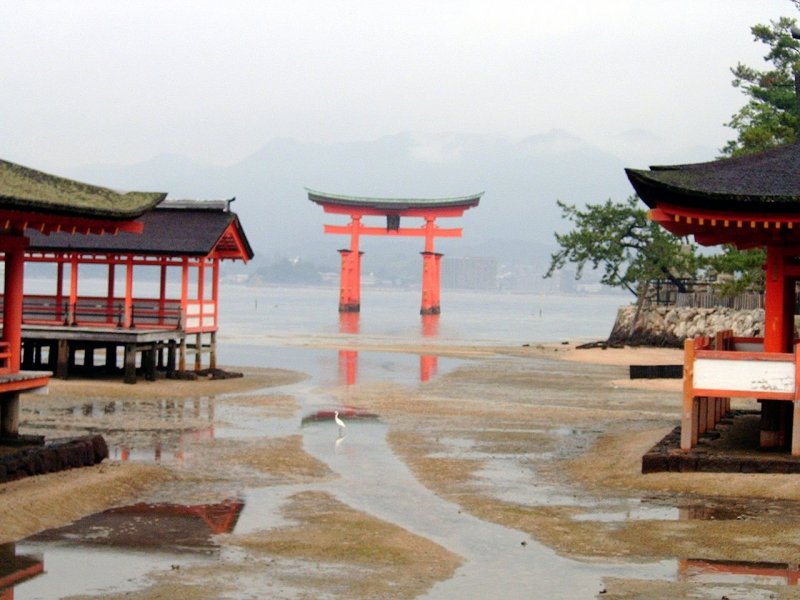 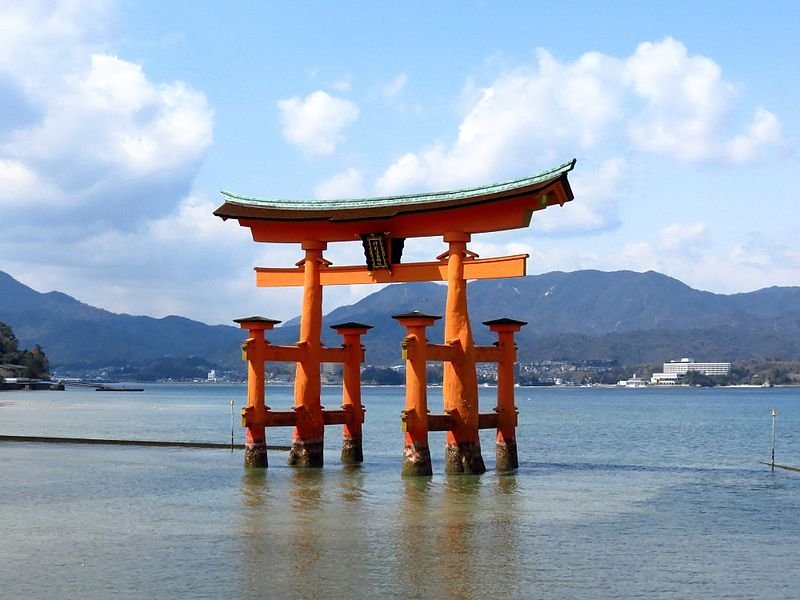 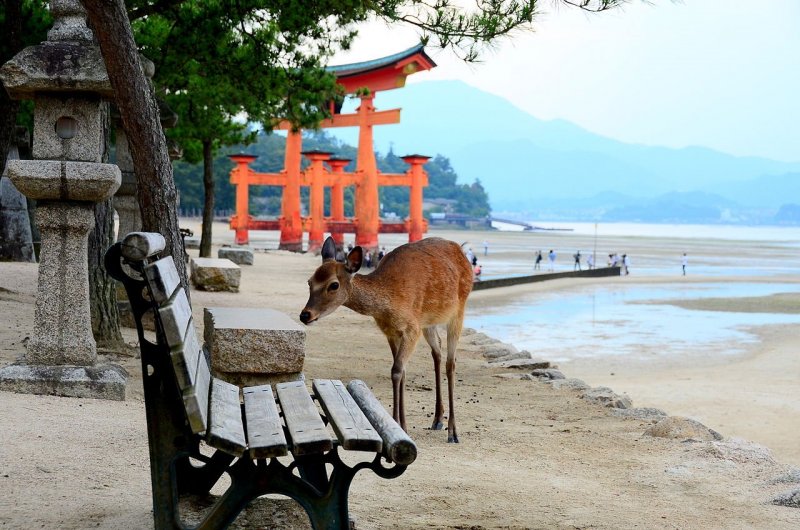 The Itsukushima Shrine is located on the shores of Miyajima, an island in the Seto Inland Sea not far from Hiroshima city. While the name Itsukushima means “island of worship”, the site is more famously known as “the floating shrine”, as the buildings appear to be floating on the water when the tide rolls in.

Beginning in June 2019, the large torii gate of Itsukushima has been undergoing renovations, though a completion date has not been announced.

Itsukushima’s main shrine was first constructed in AD 593, and was mentioned in a famous Japanese book (Nihon Koki, or Notes on Japan) in AD 811. The shrine became popular as a pilgrimage destination for members of the Imperial Court during the Heian Period (745-1185) and remained an important location in the Edo Period for those living in western Japan.

The main shrine precinct consists of a collection of buildings, such as the Purification Hall and the stage for bugaku (court music) performances. Many of the buildings are linked by covered corridors and dotted with bronze lanterns from the early 20th century. An arched bridge, dating back to 1557, was said to be used by Imperial messengers and is one of the links between the shrine and the mainland. Most notably, Itsukushima is home to a Noh stage that dates back to the early Edo Period, and is significant for the fact that it’s the only Noh stage in the country that floats upon the sea.

Due to their history and unique design, the buildings of Itsukushima Shrine were designated as a National Treasure in 1952 and became a UNESCO World Heritage Site in 1996.

Visitors who wish to see the shrine as it “floats upon the waves” would do best to plan their visit according to the tides. A schedule of the day’s high and low tides is usually posted at the shrine’s main entrance.

Considered one of the defining views of Japan, Miyajima's 'floating' red torii gate proudly sits off the shore of the main island. At 16.5 meters in height, this iconic site is what first greets visitors arriving by ferry from the mainland. The torii’s main pillars are made from 500-600 year old camphor trees that are naturally resistant to rot and insects. The current gate dates from 1875.  When the tide is low, it is possible to walk right up to the gate itself.

Designated a National Treasure of Japan, this beautiful white-and-vermilion building floats on top of the waters at high tide, just as the famous torii gate does. The extended curved eaves are covered with cypress thatch; the honden (main hall) along with the Haiden and Heiden were built during the Nara period.

Deer Near the Torii Gate

The deer of the island are docile and accustomed to human interaction. The cute inhabitants of the island often bravely go up to tourists and beg for food. They're a popular part of any visit to the island and fun to pose for photos with. Although they may seem tame, always exercise due caution when dealing with wild animals.

Travel to JR Miyajimaguchi Station on the Sanyō Honsen Line. Walk to the ferry port. It's about 10 minutes from Miyajimaguchi Port to Miyajima Island by ferry.

Hiroshima's most famous fireworks display. 60 minutes of amazing, colorful bursts shot from the water in front of the huge red tori gate in front of Miyajima island.

The original formal procedure to worship Itsukushima Shrine was to pass through the big red torii gate on a special boat.

Itsukushima Shrine at hgh tide, with a view of its world famous torii gate

Miyajima has been known as an island of God for 1400 years. And the island itself has been worshiped by people all over Japan.

I heard that Miyajiima is considered as one of the "three most beautiful spots" in Japan. This is likely due to this beautiful Itsukushima shrine playing a central part, and rightly so.

Mysterious Miyajima at Night is truly beautiful. These photos were taken in late November.

Hiroshima's most famous fireworks display. 60 minutes of amazing, colorful bursts shot from the water in front of the huge red tori gate in front of Miyajima island.

Medieval Heian parade to pay thanks to the powerful Heike clan leader, Taira no Kiyomori, who turned Itsukushima Shrine on Miyajima into the stunning sight we see today.

Sunset Road On The Sea

Under the big torii gate floating on the Seto Inland Sea, there was a brilliant sunset road on the water surface.

A traditional Japanese bugaku performance at Itsukushima Shrine tells the tale of Ryo-o, the Dragon King, in front of the floating shrine of Miyajima.

What you see on Miyajima, close to Hiroshima in western Japan, is up to you. Itsukushima Shrine, the floating gate, Gojunoto pagoda and Senjokaku Hall feature. Wherever you look, there is beauty and wonder.

Auberge Watanabe in Miyajima is conveniently located right in front of the entrance to the Daisho-in Temple grounds, on a quiet side street next to a stream.

Backpackers Miyajima is located in the Hatsukaichi city are of Hiroshima, right next to the ferry which takes you to the beautiful island of Miyajima.

Hayashi-ya is located on a back street in the charming residential area of Hiroshima's most famous, Miyajima island, this small cafe-restaurant specializes in high quality

Kiyomori-Chaya restaurant stands on a little island near Itsukushima Shrine on Miyajima. It's ideal for a restful lunch or tea break.

Momijidani Park (紅葉谷公園, Momijidani-Kōen) is one of the most famous maple leaves valley parks in Japan. The park is located at the foot of Mt. Misen, along Momijidani River, behind Itsukushima Shrine in Miyajima, Hiroshima. [Wikipedia]

Daishō-in or Daisyō-in is a historic Japanese temple complex with many temples and statues on Mount Misen, the holy mountain on the island of Itsukushima, off the coast of Hatsukaichi, Hiroshima, Japan. It is the 14th temple in the Chūgoku 33 Kannon Pilgrimage and famous for the maple trees and their autumn colors. [Wikipedia]