A One Piece themed bar in Hiroshima city centre

Calling all オタク (otaku - nerds)! If you are a fan of the insanely popular Japanese manga and anime One Piece then you will fit right in this One Piece themed bar situated in Nagarekawa, downtown Hiroshima.

Located directly across the hallway from Wonderful Joke, another one of Hiroshima's kooky, interesting bars, Thousand Sunny takes more from One Piece than just its name.

When my friends and I entered Thousand Sunny one night, on a slight detour to our usual haunt, Wonderful Joke, we were welcomed enthusiastically by the lovely barman who greeted us with a smile and a handshake. He seemed as excited to have us there as I was to sit in a bar surrounded by memorabilia from such a good anime. The regulars seated at the bar were just as friendly, greeting us and offering to take photos for us.

Looking around the bar there are posters, plush toys and figurines everywhere! Almost every available counter and shelf space behind the bar is home to one of the characters from the show and once we were seated at our table a figurine was placed down in front of us for us to look at, photograph and admire.

Even the bathroom hasn't escaped the One Piece makeover the rest of the bar received with many figurines also hiding out in there. The space in the bar must have been all used up! Our beer was even served to us in One Piece glasses and the bar serves One Piece inspired drinks named after some of the characters.

The bar itself isn't particularly large. There are less than ten seats at the bar counter and two or three tables on the floor. It's quite bright in there as well which some people may find off-putting in a bar. It did make it easier to see all the figurines though. They have quite a large spirits collection behind the bar however the food menu is small. Most people who frequent here probably don't go for the food though and I imagine other One Piece fans can overlook this lack of food options.

Any anime fan will enjoy the chance to sit surrounded by by such an impressive collection of characters from such an awesome show. 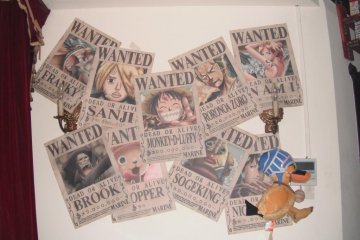 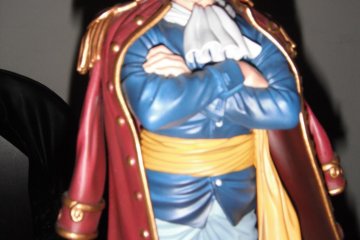 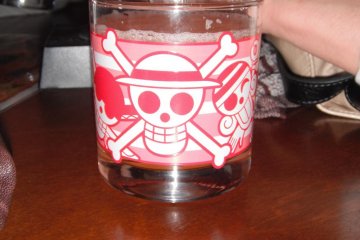 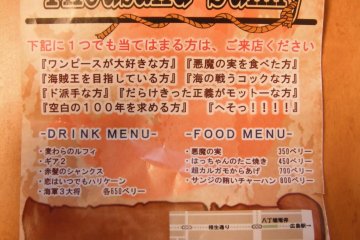