A festival of bonfires in January

Tondo Matsuri are festivals centered around a bonfire which are held at Shrines and along the rivers or in neighborhoods around Japan. In Hiroshima, local communities gather at the site of their bonfire in a park or open space along a river bank. Some shrines hold smaller fires on their grounds.

Tondo Matsuri is part of Koshogatsu—which literally means "small new year"—celebrated at lunar New Year. These festivals are usually held on the 2nd or 3rd weekend of January. The purpose of the event is to bless and then burn the previous year's New Year decorations, roast mochi rice cakes, and enjoy warm sake while watching over the flames.

Although your clothes may smell of burnt offerings when you leave, remember the smoke is supposed to provide good luck. There are no fees to watch or take part in these events, but a donation to the shrine putting on the event is appreciated.

Some festival goers bring their own mochi to roast, but you are likely to be given some to roast if you go there empty handed. Some shrines pass warm sake round, others offer Zenzai sweet bean soup - a real treat with roasted mochi cakes on a cold, winter day.

If you're driving or biking along the rivers that run through town or in the countryside around the middle of January you may well see groups of people gathered around large bonfires, eating and drinking.

In general, the event is held on the 2nd weekend of January. Most people will make note of the date displayed at the Shrines when they visit on New Year's Day. Many Shrines in Hiroshima city are planning to hold this event on January 14th this year.

Not far from the Peace park, Sorasaya Shrine's tondo in the neighboring park in Honkawa-cho is a spectacularly big bonfire and family-friendly event where kids can play in the park's playground as well as watch the spectacle.

In the center of Hiroshima located across the street from Chuo-Koen central park, next to Hiroshima Castle, is the large Gokoku Shrine. This traditional place has one of the most popular bonfires in the city. There is quite a lively festival atmosphere here as a sizable crowd usually gathers for the event and the crowd seems dangerously close to the popping of bamboo in the fire. See some footage of this event in the video below.

A short bus ride from Hiroshima Station (to Ushita-asahi bus stop), is the town of Ushita's local shrine Waseda-jinja which has its tondo on January 14 from 6pm.

Walk 10 minutes from Hiroshima Station toward Hakushima and turn under the train bridge to find Nigitsu Shrine (Futaba-no-sato area) which is a popular shrine especially honoring the Japanese God of Luck & Fortune, Ebisu.

Continue past Nigitsu heading toward the Shinkansen side of the station to see an interesting Buddhist temple next door. Follow the small road in front of this temple another 5 minutes and head up the steps to the left to the famous Tosho-gu Shrine. At this traditional shrine, it is interesting to watch the blessing of the previous year's good luck charms in a religious ceremony by the Shinto priests. Viewers are then invited to join in roasting mochi over the small fires.

There are many other fun and interesting smaller festivals around the city. Just follow the smoke plumes to find other Tondo Matsuri gatherings at shrines, schools and parks in your local area. 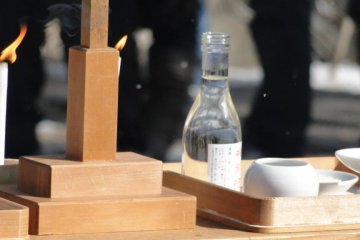 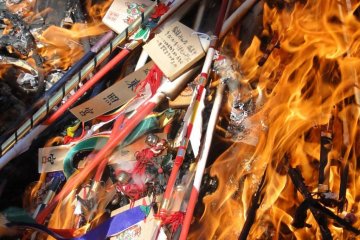 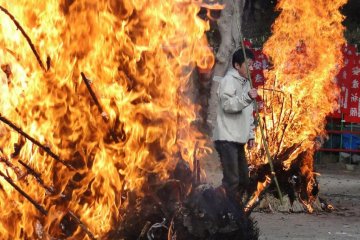 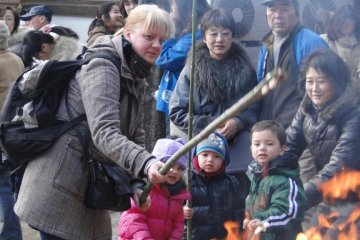