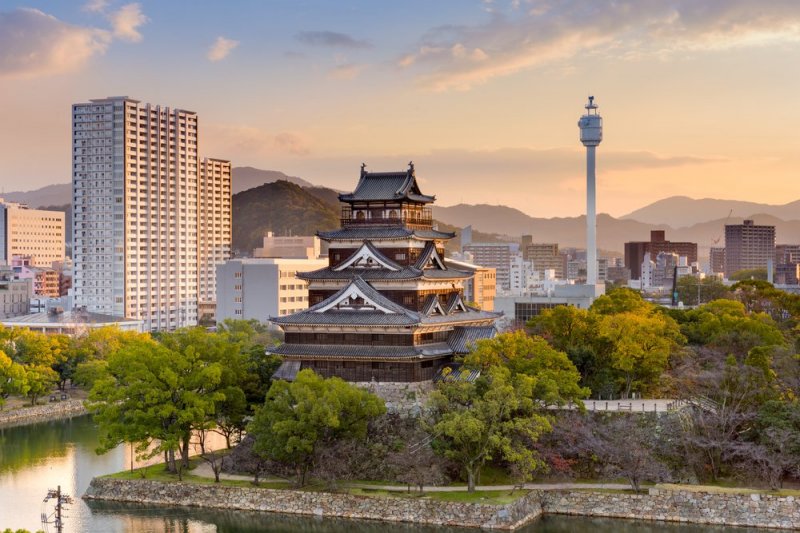 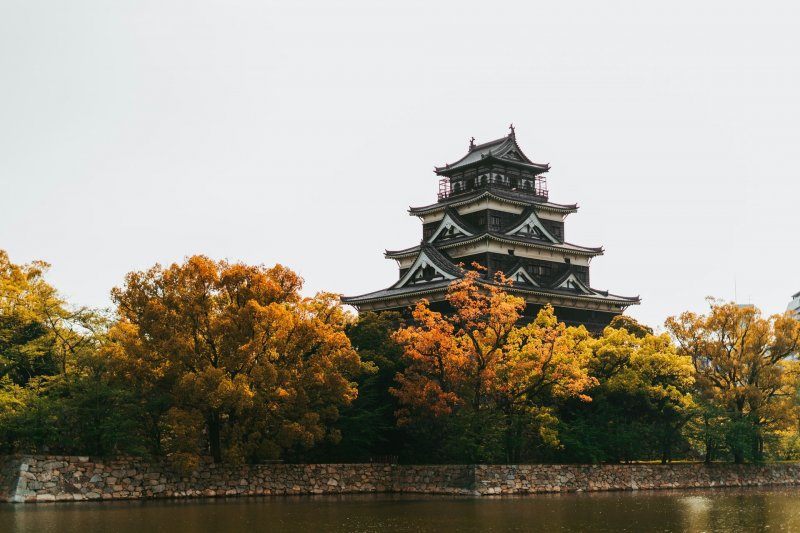 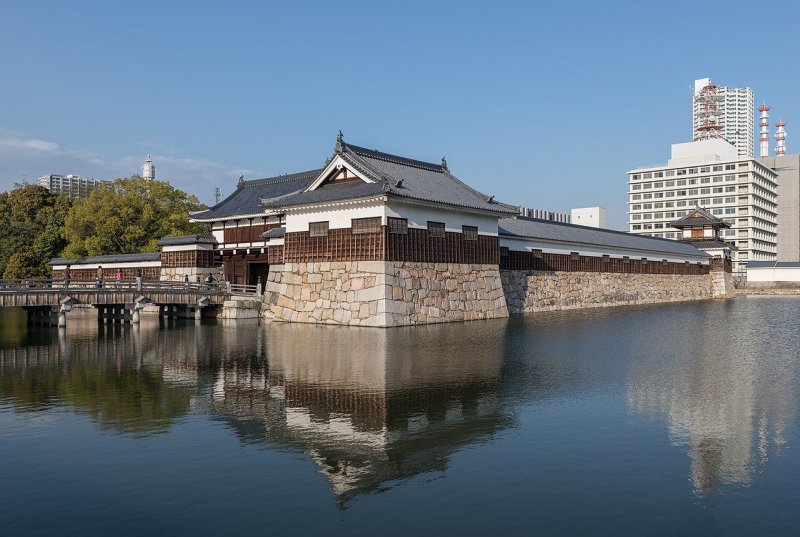 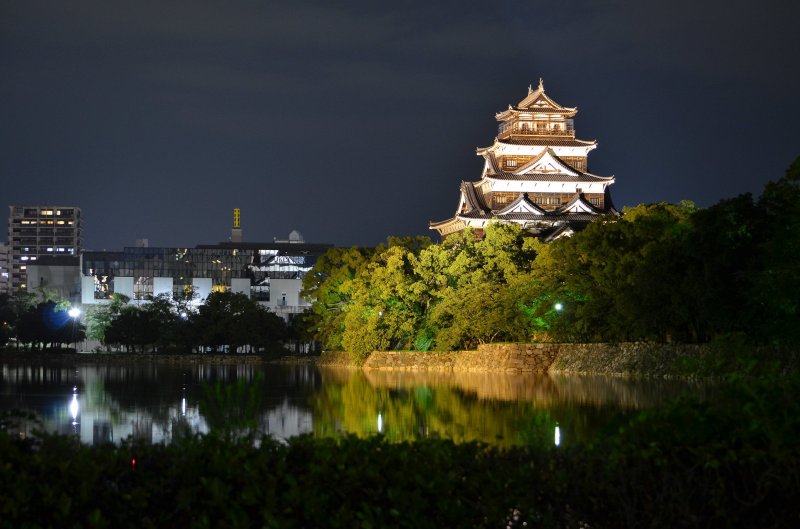 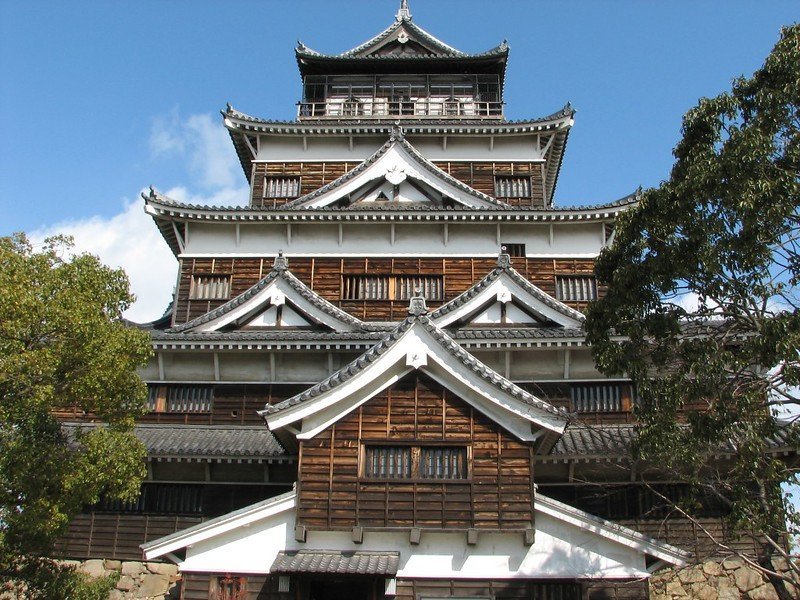 Hiroshima Castle, also known as Carp Castle, was originally built in the 1590s. It was destroyed by the atomic bomb along with the rest of the city in 1945 and rebuilt in 1958. Since then, it has also served as a museum of the history of Hiroshima before World War II The history of the castle itself, as well as Japanese castles in general, is clearly explained.

Hiroshima Castle is a good example of a castle built on a plain in the center of a city as opposed to castles on hills and mountain tops. Its main tower is five stories high and its grounds are surrounded by a moat. Within the castle grounds there is also a shrine, some ruins and some reconstructed Ninomaru buildings (second circle of defense).

Following its restoration, the castle's main keep now serves as a historical museum that covers four floors, with an observation deck on the fifth floor.

This secondary defensive compound sits off the southern side of the castle grounds along the moat. View the restored gates, bridges and turrets. Free admission. Hours: 9:00 to 17:30 (Apr–Sept) or 16:30 (Oct–Mar)

In the evening, Hiroshima Castle can be seen lit up making for a beautiful sight and reflection in the surrounding moat.

By foot: The castle is about 10-15 minutes walk from both Peace Park and Shukkeien Garden. By foot, it can form part of an ideal day itinerary.

More about transport in Hiroshima >

A Walk Around Hiroshima Castle

The 1.5km path around Hiroshima Castle will take you on a scenic journey through time and provide you with beautiful 360 degree views of the castle

One of the main features of Hiroshima city, this reconstructed castle offers a glimpse into Hiroshima's feudal history.

The Hiroshima Kanzake Festival brings the delights of warmed sake to the world. Warming the beverage is said to bring out a depth of flavor that you may not notice when it's served cold.

If you like Japanese dishes and love your vegetables, you will enjoy a meal at NonoBudou 野の葡萄 "Natural Garden Terrace"

Shukkei-en is a historic Japanese garden in the city of Hiroshima, Japan. The Hiroshima Prefectural Art Museum is located adjacent to the garden. [Wikipedia]

With its beautiful skylines and active waterways, Oizuru Tower offers its visitors a way to see all of that activity—day or night—unobstructed by glass or rails. The wooden floors and ceilings give off a gentle warmth and the pillars that support the ceilings also provide beams of light. Instead of glass or railings, guests can feel the Hiroshima air wash over them thanks to the stainless-steel net fence. With unobstructed views of Hiroshima, including the Peace Memorial Park and the Atomic Bomb Dome (and even Mount Misen of Miyajima on clear days), the tower offers viewers a way to feel at one with the city. Hiroshima Oizuru Tower is also home to an assortment of shops and cafés. Visit the first floor to find that special souvenir of one of Hiroshima’s local products at Hito to Ki. You’ll also find Hiroshima-style okonomiyaki in Akushu Café—including unique wrap-style okonomiyaki. On the 12th floor, you can also fold your own origami crane and leave it on the Oizuru Wall with your well wishes for the future. From the 12th floor to the 1st floor, there is a slide “cool-cool-cool” that runs alongside the spiral staircase. Why not try sliding your way down twelve floors—or just a couple, as you can exit in between floors. While you take a walk inside, browse the original comic created by Shuho Sato—manga artist of “Umizaru” and “Say Hello to Black Jack”—the works inside Oizuru Tower reflect on the theme of peace. No matter what you decide to do, you’ll be delighted by the spaces and experiences that you can create. Discover the past, present, and future of Hiroshima while you gaze out at this bustling city.

The Atomic Bomb Dome, or Gembaku Dome, was once the Hiroshima Prefectural Industrial Promotion Hall. On August 6th, 1945, the world’s first atomic bomb exploded in the air directly over the building. The Hiroshima Prefectural Industrial Promotional Hall was initially built in 1915. Designed by Czech architect Jan Letzel, the building featured European construction styles and was considered both a picturesque and important site in Hiroshima city. When the atomic bomb exploded directly overhead at 8:15am on August 6th, the resulting nuclear blast killed everyone within the building itself and in the immediate vicinity. The roof was set ablaze and the walls were destroyed but the metal frame of the building was mostly left intact. In the post-war years, the hall became known colloquially as the Atomic Dome. Several renovations have been carried out on the remains over the decades, mostly to counteract severe weathering. In 1996, the dome was registered as a UNESCO World Heritage Site. Today, the A-Bomb Dome sits at the northern end of the Hiroshima Peace Memorial Park, a short walk from the Gembaku Dome tram stop (Gembaku-mae) and the city’s central shopping arcades. In the evening, muted lighting illuminates the dome. It presents a striking scene of sadness and loss but also perseverance and hope.