Onsen at the Hilton Niseko Village

First time is the charm

I’m ashamed to admit it, but I’ve never visited an onsen on any of my previous visits to Japan. In my defense, two of the previous visits were in the middle of the hot and humid summers of Tokyo, Kyoto and Hiroshima. My other visit was a brief four-day stop on the way back to Canada after an extended period of travel to Australia, New Zealand and Fiji. Still, how could one visit Japan and not make any effort to experience onsen?

Having arrived in Hokkaido to chilly weather in May, even by its own standards, I was determined to seek out and experience a Japanese onsen for the very first time. Hokkaido is blessed with an abundance of geothermal springs which naturally heat the water. Furthermore, Niseko is an area with some of the most popular and well-known onsens in Hokkaido.

After some careful research I decided that I would visit the Niseko Hilton Onsen. The hotel offers a complimentary shuttle with various stops throughout the area, including Hirafu where I am staying, and allows non-guests to use their onsen services for a small fee (¥1000 which includes a large towel and a modesty towel).

There was some trepidation at first as I knew that no clothes were allowed in the onsen. The natural mineral baths are separated into men’s and women’s designated areas but both essentially have the same view and layout. Part of the downfall of arriving in an area in low season is that everything is winding down and there is not much activity. In the case of the onsen, this was fortuitous as the onsen was completely empty when I arrived. I had my own private onsen!

I was well aware of many of the onsen rules and after sitting down on the wooden stool and washing and rinsing myself completely I walked past the indoor onsen pool and straight out the door to the outdoor pool. Almost instantly the issue of being completely naked became non-existent and as I submerged into the water naturally heated to 42 Celsius. I immediately discovered why onsen in such a popular and quintessentially Japanese experience.

The outdoor onsen pool sits up against a large freshwater pond filled with koi fish that periodically break the surface of the water before re-submerging. In the distance is Mt. Yotei, currently covered in snow and as I bobbed up and down in the pool I watched thin cirrus clouds wisp past its lofty peak. The immediate area is by surrounded trees and it truly felt like I was in the middle of the forest.

After exiting the pool I made sure not to rinse off with water so as to not wash away the minerals I had been soaking in for the past thirty minutes. My entire body was relaxed and while my first onsen experience could not have been more perfect, I couldn’t help but chide myself and think, “What took me so long?” 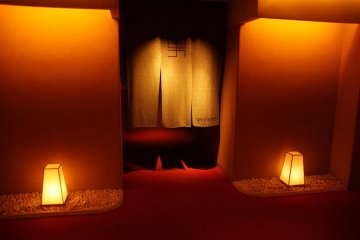 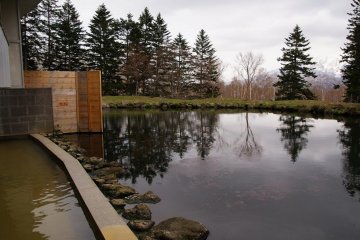 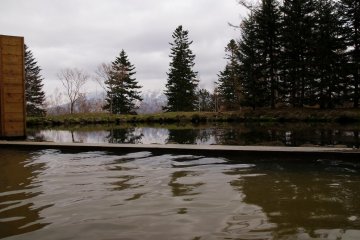 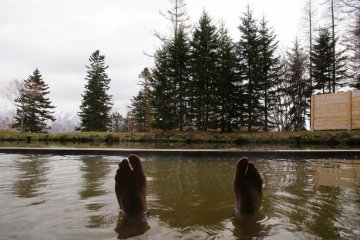 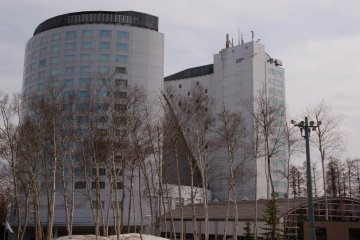