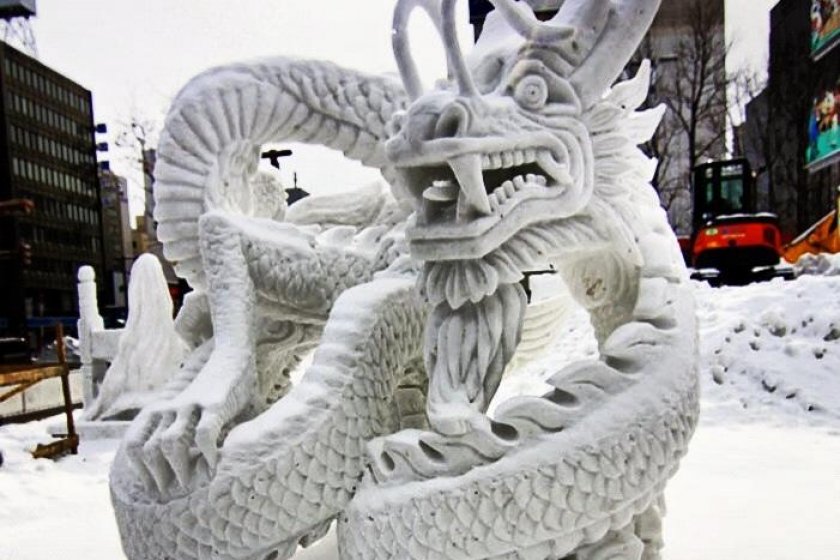 An art museum made of snow

February is the coldest month in Japan, and that means a lot of snow. Sapporo has found a way to use all that snow to their advantage, and for the past 63 years, they have held one of Japan's largest winter events-the Sapporo Snow festival. Millions of people from around the world come to see the snow sculptures that make Odori Park a winter wonderland.

When I visited Hokkaido, the air was bitter cold with snow flurries and northern winds burning any exposed skin. I wrapped my scarf around my face, pulled my hat over my forehead, and walked with careful, small steps on the icy sidewalks. Some of the essentials for going to Hokkaido in the winter are grips to attach to the bottom of your boots so you don’t fall on the ice, and heat packs (called kairo) to keep in your pockets or stick to your body. I had kairo in my shoes, gloves, and pockets at all times, but even then I had never felt such unrelenting cold. I went to Sapporo unprepared, but luckily both essentials can be found at almost any convenient store in the area.

The Sapporo Snow Festival is a festival held annually each winter up in Sapporo, Hokkaido, attracting visitors from all over Japan..

The Snow Festival stretched out across Odori Park, starting from the Sapporo TV Tower with a large skating rink. From the top of the tower, the festival spans beneath in glittering lights and white snow. Builders come from all over the world to create their pieces at the festival, and some of the most talented teams compete in the International Snow Sculpture Contest.

The winner from the 2012 International Snow Sculpture Contest was The Leaping Dragon from Hong Kong. It was a monstrous dragon, representing that year’s Chinese Zodiac. According to the sculpting team, the dragon represents harmony, good luck, kindness, righteousness, wisdom, and strength. With their artwork, the team hopes to show the world their wish for world peace and share the virtues of the dragon. Many of the other sculptures had a similar theme of peace and unity. My personal favorite was a sculpture from Sweden, called ​Sweden no Omiyage​, or Sweden's Souvenir. The sculpture had incredibly clean, modern lines, and its simplicity understated the craftsmanship needed to complete such a piece.

Some of the most famous, largest, and intricate pieces at the Snow Festival that weren't part of the contest were the Snow Aquarium (a gigantic display showcasing the different animals of the sea), Mickey Mouse from Fantasia, the National Palace Museum from Taiwan, the Taj Mahal, and Tsuruga Castle. It's incredible to see the detail in such monstrously large sculptures that only last for a week.

The pathway to see the sculptures is lined with hot drinks and food. The specialties in Hokkaido are potatoes, lamb, seafood, and of course Sapporo Beer. I grabbed a cup of some hot citrus sake to keep me warm as I walked around the park, but my drink was cold within seconds of hitting the air. Good luck staying warm!

Find out more about Odori Park. 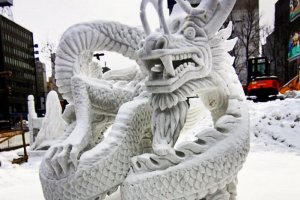 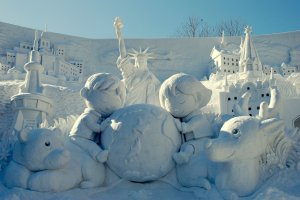 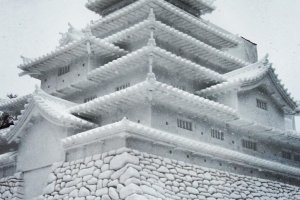 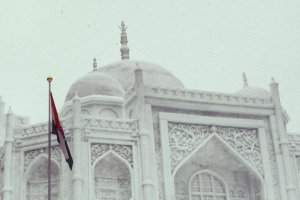 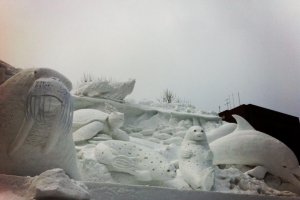 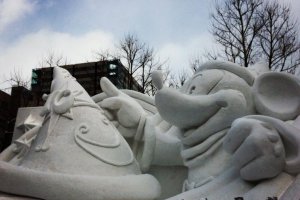