Retro bottles and refreshing bubbles from an onsen town

Stocked in chilled cabinets and shops all over the town, this perfectly limpid, sweet and effervescent drink is named after the Japanese word for ‘Rifle’, or ‘Teppo’. The association becomes obvious once you have tasted its powerful levels of fizz. The bottle label even depicts a cannon, and it is said that back when the bottles were corked rather than capped, Teppo’s potent levels of carbonation had the side effect of causing the corks to fire open, just like cannon balls!

In fact, Arima town has a long history with cider. The waters of the natural spring at Arima’s Tansan Sengen Park were first used in the making of Japanese cider in 1875. Today, you can still drink this water fresh from a faucet at the park, but as the spring’s iron content has increased over the years it is not all that appealing.

The same carbonated water is also used to make Tansan Senbei, Arima’s second signature item. This crispy cracker is sold in shops all over Arima, where visitors can sample before they buy. It comes in the form of a thin, round wafer and is available in different flavors, both plain and with fillings such as chocolate, strawberry, and matcha.

A side note on Japanese cider:

Although cider was first sold in Japan in the 19th century by a Brit, Mr. Simm, Japanese cider today is an entirely different kettle of fish to its British ancestor. While British cider is made from fermented apple juice, there is not a trace of apple to be seen when it comes to saidaa.

In fact, ‘saidaa’, is infinitely more similar to Sprite or 7 UP, being sweet, fizzy and above all, non-alcoholic. It is an incredibly popular summertime drink with young children and adults alike. 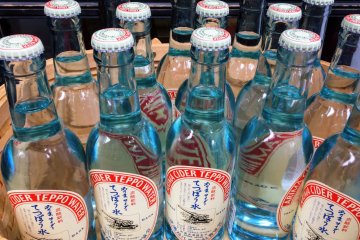 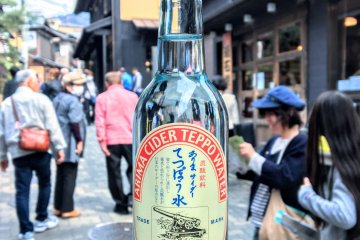 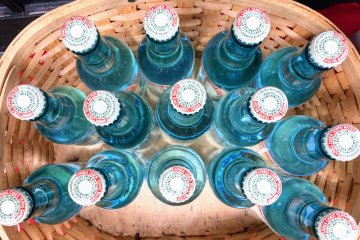