Celebrate the four seasons of nature

The darkest parts of the night are the moments just before dawn. The fishermen in Awaji, who bravely go out and fish night after night, know this very well. Being in tune with nature’s heartbeat is part of life here. Just as you cannot hurry the dawn of the day, you can’t hurry the four seasons. So, when the deliciously named Noodle Fish season arrives in Spring, you can’t help but celebrate its bounty and the gifts that no man can create. It may take its time to bring food from the ocean to your table, but this is nature’s way of celebrating life, one where every day of growth is part of nature’s timing.

Going to the fish markets here shows how much the Japanese are in tune with the sea and its blessings. To know Japan is to experience their reverence of the sea. It gives rise to the amazing food culture and respect for nature’s blessings and ingredients. That is the idea of itadakimasu, a prayer of thanks that the Japanese give before taking a meal. Thank you for sustaining our life, and our children’s life.

Awami, which means taste of Awaji, is the showcase Japanese restaurant on the island. Dining here is like being transported to the culinary temples of Kyoto’s Pontocho district. The intimate eight-seat solid wood sushi counter and the Kyoto-trained chef is all part of the refined experience. What’s more, the ceiling-to-floor windows, with views of the rolling green fields and simmering ocean beyond gives the place an airy and relaxed feeling.

Be sure to try their set lunch menu. This is no ordinary bento that you find in the supermarkets, train stations, or food halls, as delicious as they are. The fish fillets twitter when sprinkled with salt, that is how fresh it is. The chef tells me that he tweaks the vinegar in the sushi rice depending on what fish is served on it. Matching the fish and rice is key for a complete culinary experience.

Kenichi from Grand Nikko Awaji Resort tells me that every month on this food island of Awaji is associated with the harvest of a particular seafood. For example, January and February are for codfish and king crabs, while Cockle Clams with Eggs is at its tastiest in Spring, being tender and plump. Locals also celebrate the arrival of the Noodle Fish at this time, which is best served in tempura, locking in its taste. In June, Ayu or Sweetfish marks the arrival of summer, which are caught in the rivers. They only live for one year, so it is like eating four seasons in one go. Autumn is famous for Saury, Bonito, Mackerel, and Saury from late August to early September. Timing is everything here, for some fish, there are only 10 days in a year when a fish is at its best for eating. Blink and you could miss it. In December fish are fatter because of the cold weather, and whether you try the Angelfish or Grouper, the wagyu of fish keeps us warm during the cold weather.

In the seventeenth century, the shogun from Tokyo (then known as Edo) bought fishermen from nearby Osaka, to teach him how to catch fish, such is the respect shown for their wisdom and knowledge. Indeed, many families on this island are still engaged in primary industry, whether it is onion farming, or fishing with many ports on the island accessing the Kuroshio Current, bringing nutrient-rich waters from the tropics to Alaska.

Since the days of the Tale of Genji in the Eleventh century, part of the fun of experiencing Japanese cuisine is trying to guess what lies inside those immaculately presented meals. The alluring yellow ball could be a lemon peel dessert or a savory dish, but you don’t know until you take it in, with its almost melt-in-the-mouth texture and the delicate taste of mince hidden behind the covering of mashed lotus root. On the other hand, the tender winter melon slices were easier to guess, being a comfort food that is said to lower your internal heat and blood pressure, it is nature’s way of preparing your body and mind for summer. The Hotate scallops were also easy to spot in its shell, being juicy and well balanced with the freshly harvested onions that this island is famous for.

The head chef loved cooking since he was a child. Born to a family that owned a restaurant, he grew up with the aroma and the excitement around the family kitchen and picked up the tools of the trade with relish. He would spend hours seeing how it consumed his family, the nurture and care in the way they treated the ingredients, as well as the traditional Japanese ceramics that his father used when guests came for a meal.

At the same time, he wanted to reach the pinnacle of Japanese cuisine, so he moved to Kyoto to train as a chef for five years, learning from the masters at a traditional Japanese restaurant. His country roots were never far away, however, and returning home gave him the opportunity to serve the best Awaji ingredients in season, prepared in the traditional Kaiseki manner that has been refined over the centuries. Since the addition of Japanese cuisine to the UNESCO intangible heritage list in 2013, the number of foreign guests has increased day by day. Spring is an excellent time to visit, not only for the scallops but for the cherry blossoms as well in the last week of March.

If you are visiting Awaji Island, step inside Awami and experience nature’s harvest, and take a piece of Japan with you.

Awami Japanese Restaurant is on the third floor of Grand Nikko Resort on Awaji Island, a short trip from Osaka. 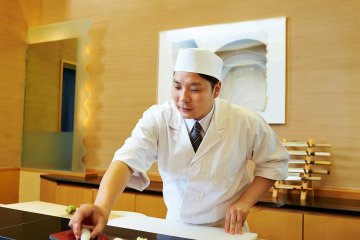 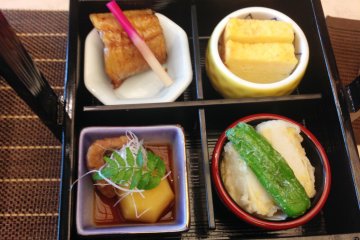 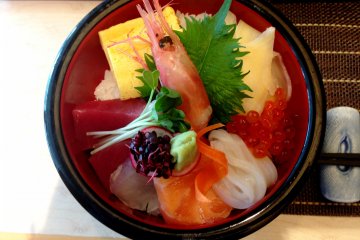 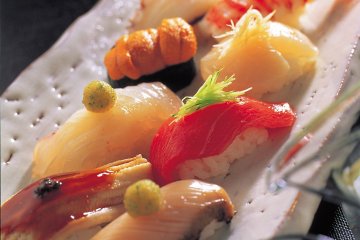 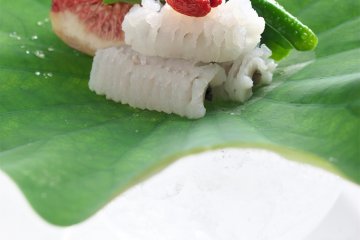