A day hike on Mt. Tsukuba in Ibaraki prefecture

If you're feeling the need for some exercise, and want to combine that with a good hike, get yourself over to Mt. Tsukuba. It's about 100 km (60 miles) from Tokyo, and is accessible by train or car.

One of the 100 famous mountains in Japan, Mt. Tsukuba rises 877 meters above sea level (about 2900 feet). It is especially known for its double peaks, Nyotai (877 meters) and Nantai (871 meters). Some call it the purple mountain as unlike most mountains in Japan, which are composed of lava, Mt. Tsukuba is made of granite and gabbro, which is the same as basalt and formed from magma.

My "Hiking in Japan" guidebook said this is an 'easy hike' - hah! Easy for one who has scaled a few mountains maybe, but two days later my legs were still sore!

We drove and left our car in one of the pay for the day (500 yen) parking lots a short walk from the shrine. However, there is a free municipal parking lot that holds 25 cars.

Donning our hiking boots we set off for the climb up the mountain after a stop by the shrine.

877 meters doesn't sound like a lot, but when I saw the sign on the funicular track that was close to the hiking trail and read that it is a 36 degree slope - I knew it was gonna be a hard climb! Of course, there were a couple of youngsters (under 10 years old) bounding up the trail with their parents puffing along behind. Two hours, and having clambered over many roots and rocks, we were at the top for a well earned lunch in the rotating restaurant that sits atop the funicular station. There are great views out over the plains and Tsukuba City from this restaurant.

Then came the easy part going down the mountain. Hah!, again. Big, I mean BIG boulders to clamber over meant using some leg muscles that haven't been used for a while. Ouch, oh, ouch! Two more hours and we were at the bottom - where we wished we had remembered to bring a change of clothes because a hot onsen would certainly have been a great treat after all that exercise. Note to self: remember backpacks, energy snacks, change of clothes...

Coming down the mountain there are some fantastic rock formations as you can see from the photos.

It's a good day hike and the views from the top, and the exercise you'll get, are worth the effort.

Access by train - take the Tsukuba Express from Akihabara Station (45 minutes) to Tsukuba Station. From there take the shuttle bus or a taxi (about 30 minutes) to the Tsukuba Jinja (Shrine) entrance.

By car - take the Joban Expressway #3; get off at Tsuchiura North exit and head to Edoya.

Find out more about Mount Tsukuba. 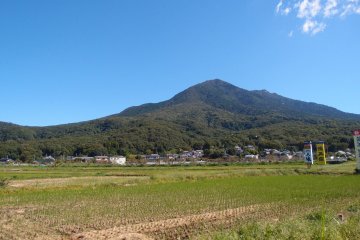 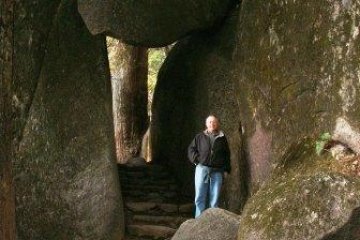 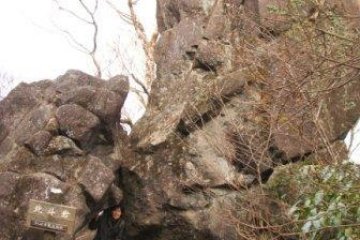