Tackling the Mt Fuji of Kyushu

The mountain that looms over the southern end of Kagoshima's Satsuma Peninsula looks awfully familiar to most visitors. With its perfect cone peak, the dormant volcano of Mt Kaimon closely resembles that of Mt Fuji. Unlike its big brother up in the Kanto region, a hike up Mt Kaimon is easily accomplished in a day and gives hikers stunning views over the southern end of Kyushu.

The hike begins at Kaimon Furiai Park, a short drive or 30-40 minute walk from Yamakawa station. A signpost at the trailhead states that the average hiking time for the trail is 2.5 hours. My hiking companion and I conquered it in an hour and forty-five minutes and if you're fairly in shape, it won't take more than two hours to ascend.

The trail initially climbs through a forest that reminded me of somewhere in the subtropics. Heavy green foliage and trees with massive roots call to mind the scenery of Yakushima, The footing in this section can be a bit slippery after even a light rain, as the ground here never has much chance to dry out.

After about forty minutes or so, the view finally opens up at a small outlook before the trail winds back into the forest again. From that point on, the climb involves a good deal of rock scrambling and the packed dirt and root path pretty much disappears. Hiking boots or at least shoes with good soles (like sneakers or trainers) are highly recommended.

There are several smaller paths that wind their way up to the actual summit (pick any one - they all lead to the top). Disappointingly, there aren't many places to grab a seat and relax on top of Mt Kaimon. The peak is just a mess of boulders and on weekends and holidays, the large numbers of hikers can make finding a place to picnic a near impossibility.

The view more than makes up for the small space, however. If the weather is clear, you'll be able to see all over the southern end of the Satsuma Peninsula from the western coast to the tip of Cape Nagasakibana and further inland. It's an impressive sight worth the two hour climb. 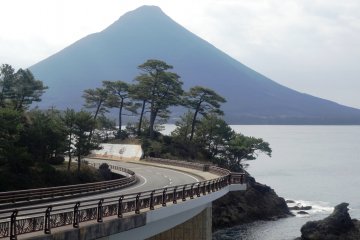 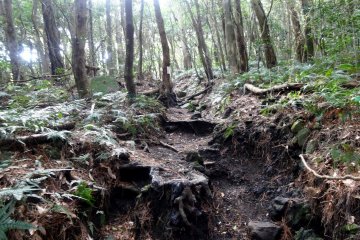 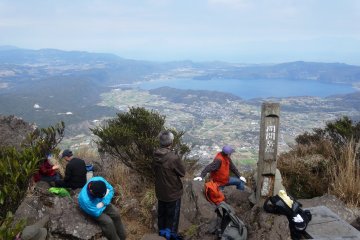