The exterior of the Kagomma Yataimura complex (Photo: Mandy Bartok)

An array of Kagoshima specialties in cozy quarters

Hungry for something but not quite sure what? Want to sample a lot of different specialties without having to restaurant hop? Head to Kagomma Yataimura, a collection of food stalls just steps from Kagoshima-Chuo station.

Kagomma Yataimura brings together twenty-five different food stalls in a "food village", most of which focus on Kagoshima specialties. You can find anythng here from fresh sashimi to satsuma age (fried fish cake) to shabu shabu made with local black pork. Prices are reasonable and the various stalls don't seem to mind if you share a few orders among a larger group of friends. When I went, we hopped from a shabu shabu joint to a yakitori stand to a sushi stall and split two orders amongst four people at each location. No one batted an eye or complained.

The various stalls here are also an excellent place to try the local liquor, a potent drink called shochu. Made mostly from Kagoshima-grown sweet potatoes, it's akin to vodka and can pack quite the punch. On average, a glass of shochu in the Kagomma Yataimura complex costs ¥200.

Most of the stalls are very small, with only about eight or ten seats available at a wrap-around counter. A few of the restaurants also have side areas that can hold a small party but it's a bit of a squeeze. In warmer weather, most of the stalls set out tables and chairs in front of their locations to accommodate additional duners. The only downside to the tight quarters is that none of the stalls are non-smoking. If you have a problem with cigarettes, you may find it hard to dine here.

A few of the stalls offer English menus but most rely on picture menus with Japanese descriptions. Despite the language barriers, the staff in the three stalls I visited went out of their way to communicate. Some staff even used cell phone dictionaries to assist with difficult product translations.

The Kagomma Yataimura is a quick, five-minute walk from the Kagoshima-Chuo station's east exit. Just walk towards the Tokyu Inn and the complex is just before that, on the right. 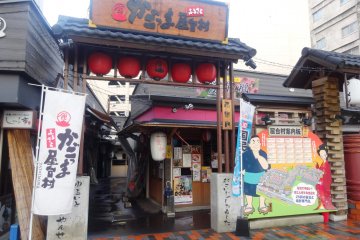 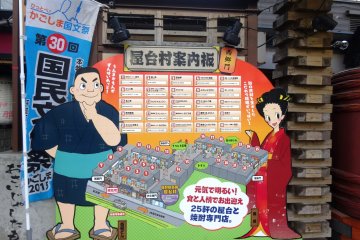 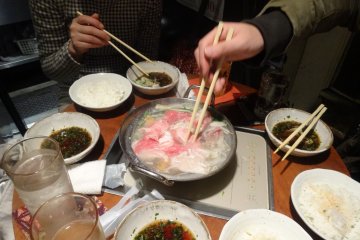 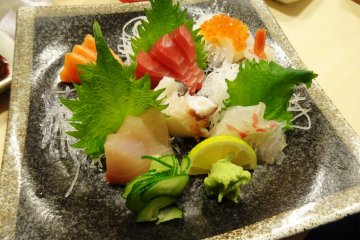