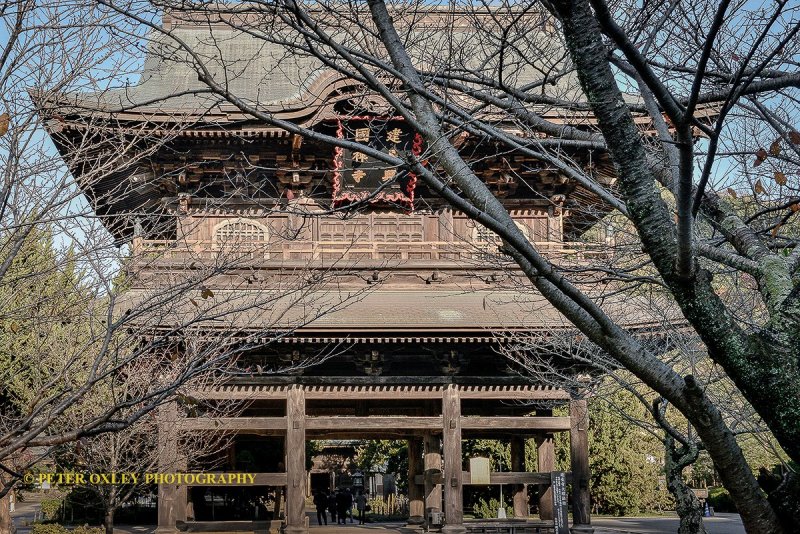 The main gate, the Sanmon. 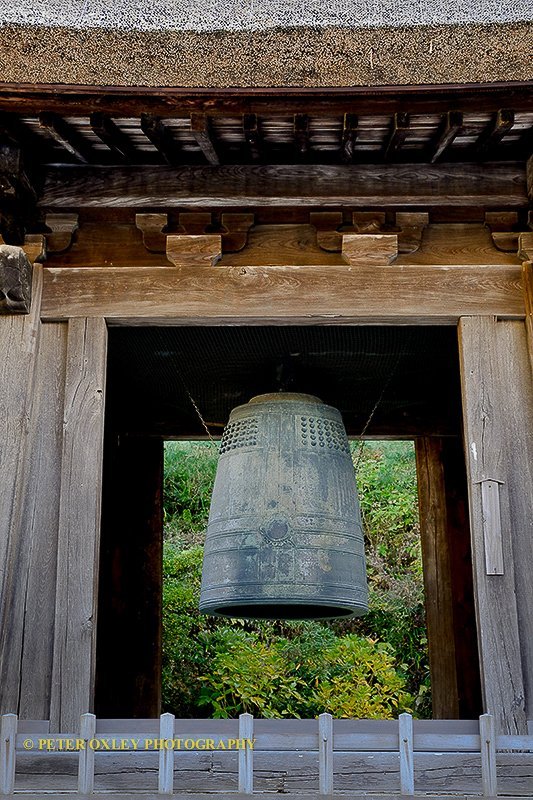 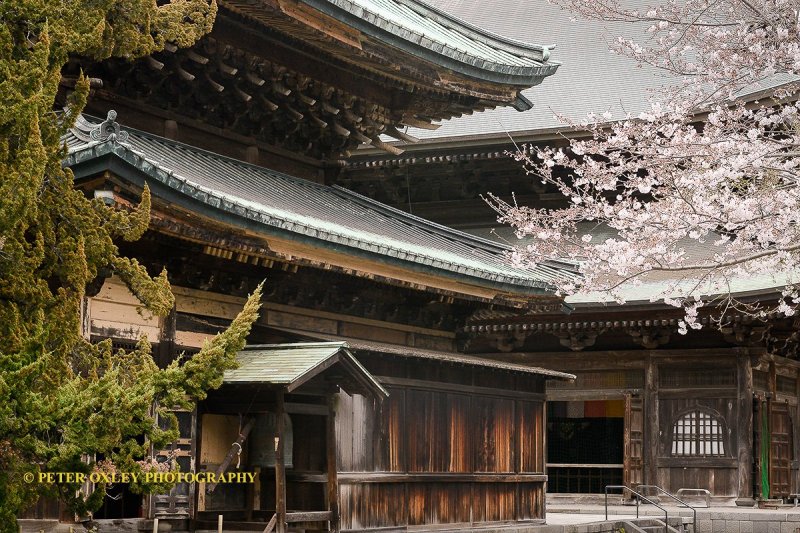 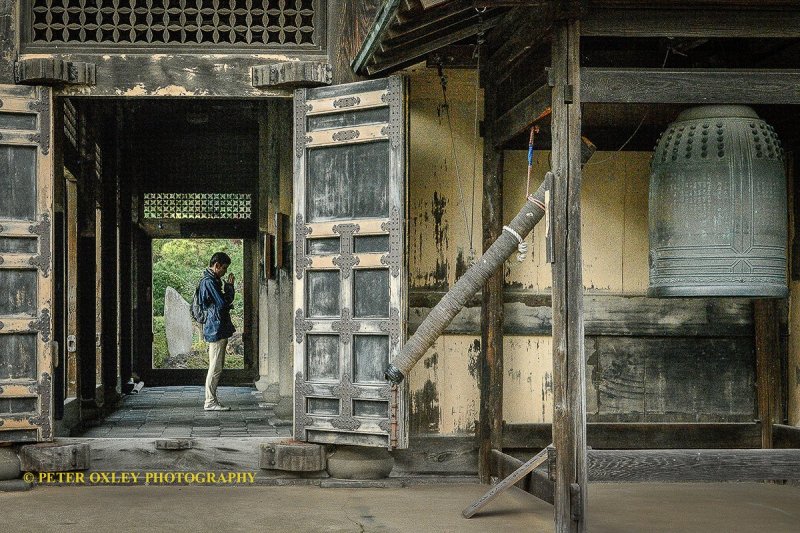 A devotee praying at the Butsuden. 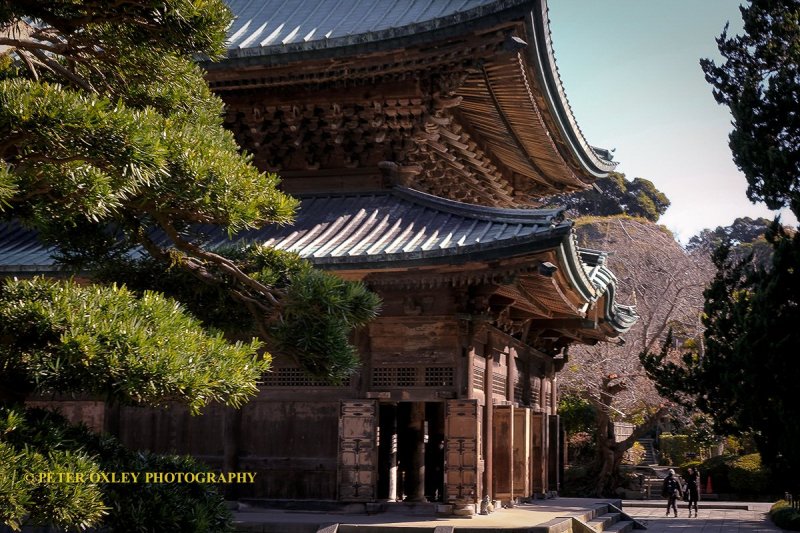 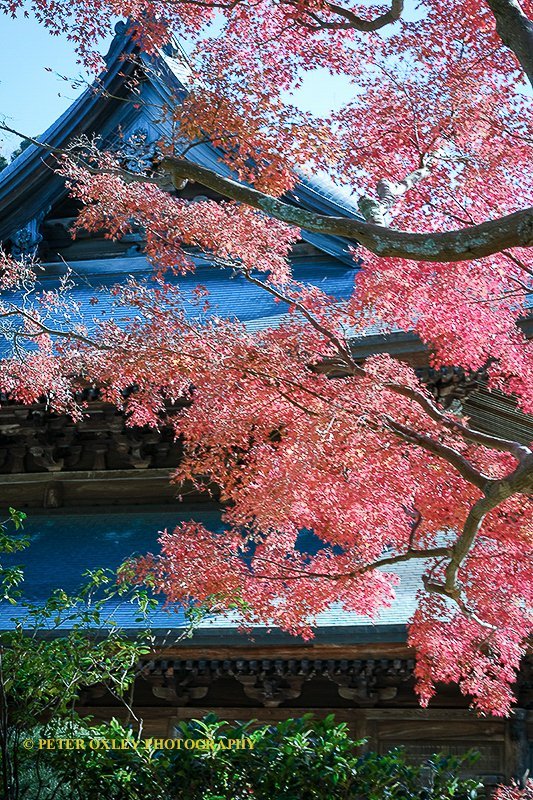 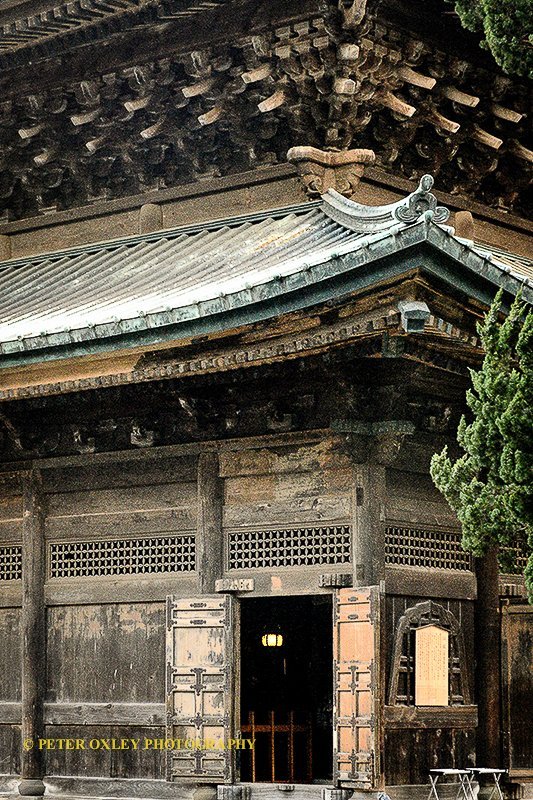 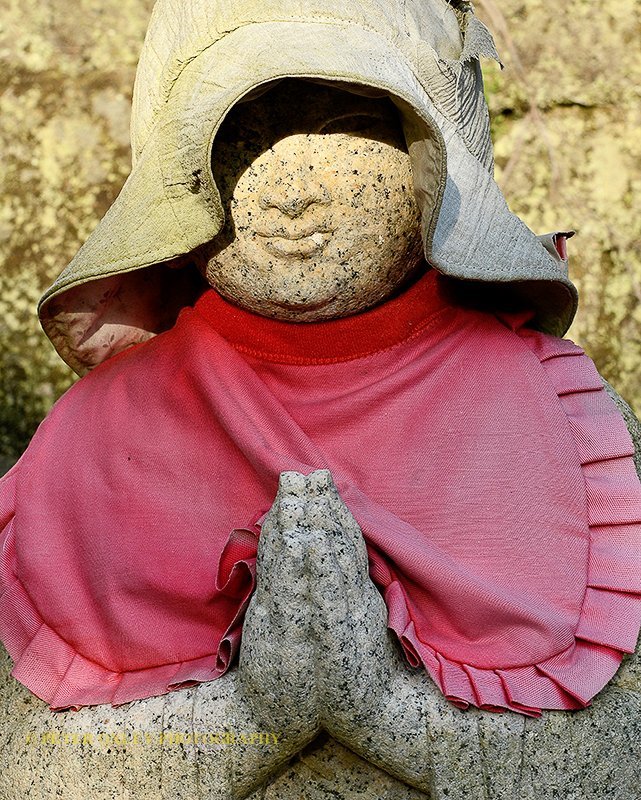 A jizo in the temple grounds. 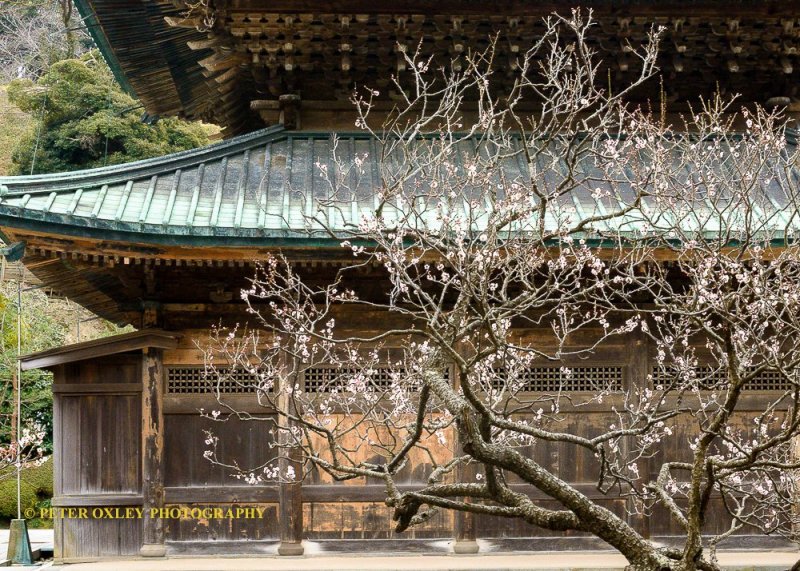 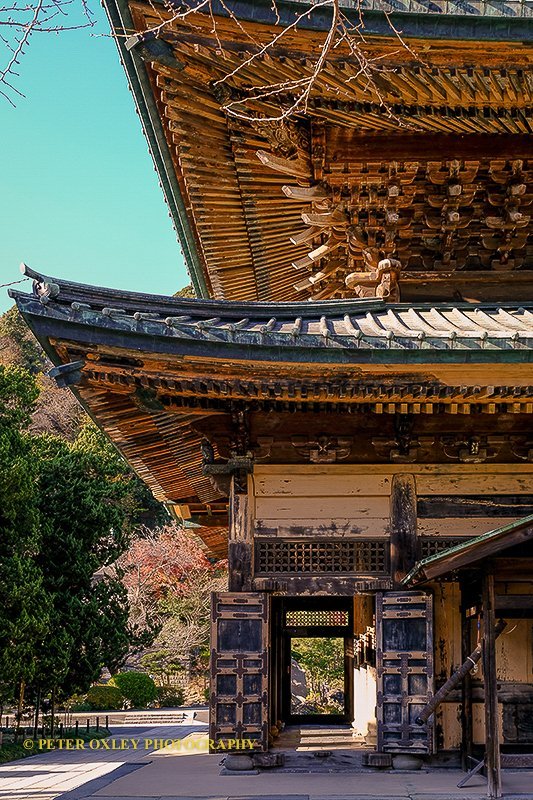 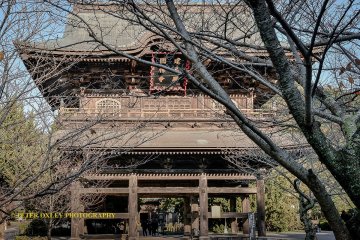 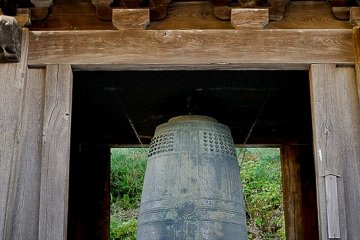 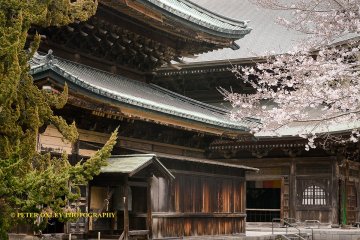 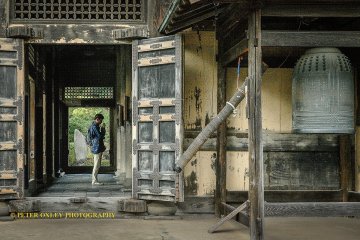 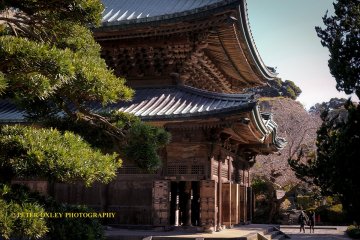 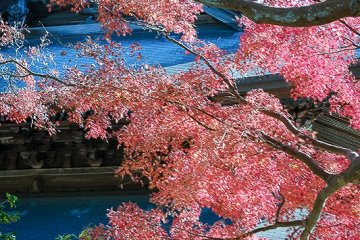 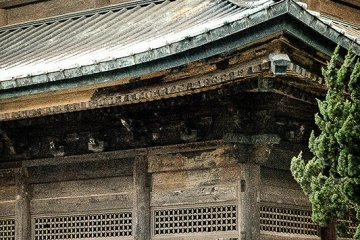 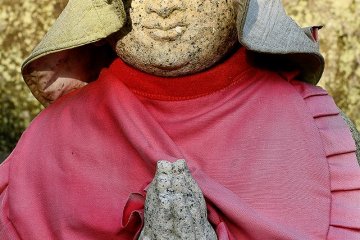 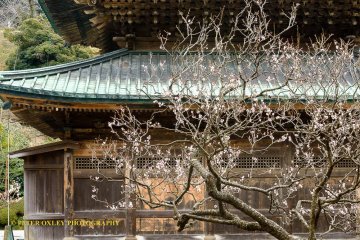 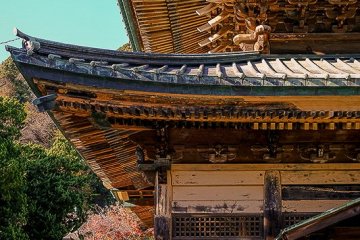 Throughout the centuries, Kenchoji has witnessed its fair share of history, including death and destruction; fires, storms, and earthquakes; rebirth and reconstruction; as the center of political machinations and strategies dictated by the Hojo regents of the Kamakura Period and later by the succeeding Ashikaga clan; as well as serving as a seat of culture and learning through the wisdom and teachings expounded by Zen Buddhism. In its heyday, there would have been more than one thousand Buddhist monks studying here at any one time.

Followers of the Samurai Code of Honor, the Bushido

The temple also functioned as an important training ground for the warrior class, following the Samurai Code of Honor, the Bushido. This was very much encouraged by the Hojo regency, as the warriors were the regents' first line of defense.

Kenchoji was commissioned by an imperial edict issued by Emperor Go-Fukakusa. The oldest Zen temple in Kamakura, it was completed in the year 1253 under the auspices of Hojo Tokiyori, the fifth regent of the Kamakura Period.

Tokiyori brought in as founding abbot the Zen Buddhist master Rankei Doryu who had fled to Japan in 1246 to escape the Mongol usurpers who were not particularly friendly towards the Buddhist philosophy and its followers back home in China.

With the abbot's guidance, the temple was constructed according to the principles of classical Chinese Zen monastic design, with seven main buildings and 49 subsidiary temples.

Unfortunately, many of the originals were destroyed by natural and man-made disasters, most notably the devastating Kamakura earthquake of 1293 and fires in 1315 and 1414. Most of the structures you see today are replacements from other temples during the 17th and succeeding centuries. Indeed, the only original is the Bonsho, the temple bell cast in 1255, located to the right of the Sanmon.

The Legend of the Badger Lives On

The Sanmon, or main gate, through which all worshippers must pass when they enter hallowed ground, has its own story to tell. Legend has it that a raccoon or badger (tanuki) helped raise money for rebuilding the gate in 1754 by transforming himself into a monk to repay the kindness of the temple’s priests, and thus even today the Sanmon is still sometimes referred to as Tanuki or Badger’s Gate.

According to the same legend, the badger disguised as a monk was supplied with flagons of sake to encourage his fund-raising activities. Those of our readers who have visited or live in Japan may be familiar with the wooden badger statue that is often displayed outside an akachochin or street-side drinking place. It looks like the legend lives on!

Kenchoji was the top-ranked of the five great Zen Buddhist temples collectively known as Kamakura Gozan, the five mountain temples that served as the hierarchical administrative and political ministries of the Kamakura shogunate and later the Ashikaga family, founders of the Muromachi shogunate, who moved the country's seat of government from Kamakura back to Kyoto.

It was through a network of these Zen temples that the edicts and policies of the ruling Hojo regents were effectively implemented and strictly enforced, all under the guise of spreading the teachings of Zen Buddhism. Thus did state and religion work hand in hand to keep a tight grip on the country and the people up to the end of the Muromachi Period.

At the time, Buddhist temples and Shinto shrines shared common ground. Often you found the two together: a small Shinto shrine dedicated to a local tutelary god protecting the imported deity in the Buddhist temple. Such is the case with Kenchoji: up on the hill behind the main temple, you will find Hanzobo Shrine housing a kami (god), along with dozens of tengu, long-nosed goblins believed to be bringers of good fortune.

The Meiji Restoration in 1868 was a political turning point that restored imperial rule to Japan under Emperor Meiji. It served several purposes, among which was putting an end to the feudal system that had held sway over Japan for almost 700 years and thereby terminating the power and dominating influence of the shoguns, Buddhist temples, and the samurai class. In their stead a new order was instituted, with Shinto declared as the state religion and the emperor anointed as the divine figurehead and absolute ruler.

Kenchoji was built on the grounds where an earlier temple, Shinpei-ji, once stood. It was also a site where executions of people who had fallen afoul of the law took place. The area was known as Hell Valley. To appease those unfortunate souls, many jizo were installed within its precincts when Kenchoji was built, with Jizo Bodhisattva enshrined as the main image in the Butsuden, or Buddha Hall.

Jizo represent bodhisattva who have opted to remain behind on earth to help and guide souls who didn't quite make it to their heavenly quarters the first time around.

Thank you, readers, for bearing with me in my historical take on Kenchoji, albeit in a rather unorthodox manner. There are plenty of other websites that give you the lowdown on exactly what to see when you visit the temple, but let me just mention one or two points that may be of interest to the avid observer.

A Dragon Painting on the Ceiling

Worthy of note are the Sanmon, the Butsuden, the Hatto which houses a statue of Kannon and features the customary dragon painting on the ceiling, and the Hojo which was originally the priests’ residence and where zazen sessions take place on a regular basis, and the pond behind it, Ryoden, designed by the great Muso Soseki in the shape of the kanji character for “heart” (kokoro). Here visitors are encouraged to sit on benches provided to contemplate and marvel at the meaning of it all.

Also worth looking out for in spring is a row of sakura trees along the walkway between the Somon and the Sanmon. A 20-minute walk up the hill takes you to the Hanzobo Shrine, and beyond it, an observation deck where you can enjoy a bird’s-eye view of the temple grounds 100 meters below. If you are lucky, you might catch a view of Mount Fuji in the distance on a clear day.

There is much to see and do at Kenchoji besides appreciating the temple's history. Check out the more than 750-year-old juniper trees that line the gravel walk leading to the Butsuden. They are said to have been planted as seedlings by the founding abbot himself. There are also luxuriant peonies and cherry blossoms in spring, pristine lotus flowers in July, and a splendid panoply of brilliant colors in the cool months of autumn.