As one of the best-known landmarks of Yokohama city, Yamashita Park (山下公園) attracts a lot of tourists as well as local citizens day and night.

It is particularly worth visiting when you only want to stop by to have a rest—sitting on a park bench and gazing out over Yokohama Harbor at the numerous cruise ships and luxury liners passing by. I myself live near Chinatown and like to take the 10-minute walk from there to Yamashita Park as often as possible during the week. The neighborhood around Yamashita Park never bores me, thanks to the many fancy shops and buildings. And the park always makes me feel good with its unique and open atmosphere and seasonal beauty. I always see people with cameras in the park. Yamashita Park is quite safe even at the night, so I sometimes bring a drink and enjoy the night view with some of my friends. Many locals come to this beloved park everyday for a quick nap or to just relax—it’s that comfortable!

And while you are here, soak in the atmosphere. Strolling through the park, you can enjoy, stunning and majestic views of the harbor and Minato Mirai. You can grab drinks & snacks at a Lawson convenience store near the park’s northwest entrance (left side facing the park), and if you’re lucky, watch street performers present spectacular shows.

Thanks to its convenient location, you can also reach (besides Chinatown) The Red Brick Warehouse, and The Motomachi shopping street, all within walking distance. From Yamashita Park, you can also catch a Sea Bus ferry back to Yokohama station. Short cruises to other destinations also leave from the same dock. (See details below.) Running the length of the front of the park, there is a street named Yamashita-Koen Dori (Yamashita Park Street) along the Park. It is listed as one of the “100 Best Streets in Japan”. Famous hotels such as the Grand Hotel, restaurants, cafes, fast-food restaurants, convenience stores, concert halls, and museums are located along it. The street, which is full of ginkgo trees, is beautiful with green leaves in the spring and summer, changing to bright yellow in autumn.

Yamashita Park has been a symbol of recovery from disaster since its opening in 1930: This park was built using landfill from the remains of buildings destroyed in the Great Kanto Earthquake of 1923. A famous ship, the Hikawa Maru, is docked in front of Yamashita Park. It was in service for 30 years starting in 1930. The chic interior of the liner is open to the public and includes a guest room once used by Charlie Chaplin. The ship/museum is open from 10AM to 5PM, and closed Mondays. Tickets cost 200 yen for adults and 100 yen for children and seniors over 65. Statues

Another way to enjoy the park is by looking at the various famous statues that dress up it up. Have fun finding them!

1. Little Girl Wearing Red Shoes: All Japanese know about the Girl with Red Shoes who is the subject of a delightful and cherished children’s song. In the song, she left Japan and moved overseas, so the girl depicted in the statue rests her eyes with longing on Yokohama Harbor.

2. Guardian of Water: This statue was presented by San Diego, which is a sister city of Yokohama.

3. India Water Tower: It was presented by an association of East Indians living in Japan, to thank the Japanese people for their support after the Great Kanto Earthquake of 1923.

4. Girl Scout: This is a symbol of Japan-U.S. Friendship.

As a local resident of Yokohama, I love Yamashita Park, and I am sure that you will love it too!

Find out more about Yamashita Park. 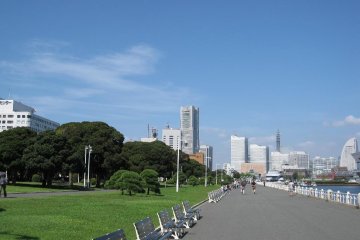 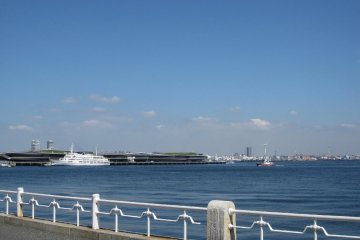 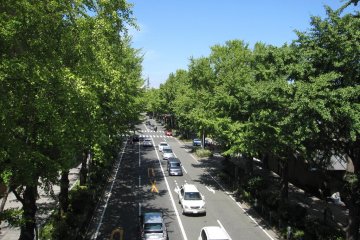 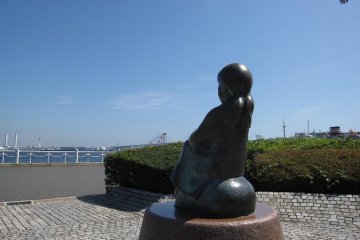 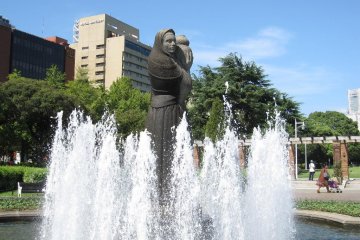 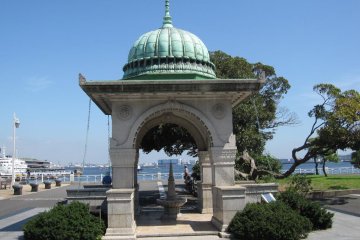 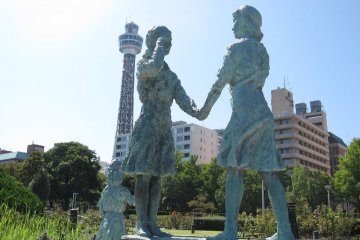