A millennium of history at Kyoto's oldest sweet store

Hot, sweaty and covered in mosquito bites is how I stumbled into Ichiwa on a spring afternoon in Kyoto. The attendant ushered me eagerly into a room overlooking a humble courtyard garden and served a pot of chilled barley tea and plate of aburi-mochi to match. I took a stick with shaky hands and eyed out the little guy on top. On the first bite, the sweet, earthy taste of miso and roasted mochi rolled across my palate. But wait, what is aburi-mochi?

Aburi-mochi is rice-flour cake that has been rolled in kinako (soybean) powder, grilled over hot charcoal and finally coated in a sweet sauce made from white miso paste. It’s Japanese name pairs aburi (grilled) and mochi (glutinous sticky rice cake) to refer to the delicious treat sold by Ichiwa, one of two stores outside the east gate of Imamiya Shrine in northwestern Kyoto. Yet in order to truly grasp the essence of aburi-mochi, one must cast back to the legend of how Ichiwa began.

Over one thousand years ago, Ichiwa first began selling aburi-mochi around the time Yasurai festival started at Imamiya Shrine. Both the shrine and the festival were built in response to an outbreak of disease and illness that struck the city’s population sometime during the Heian period. So serious was the epidemic that sources allege corpses had to be deposited into the sea twenty-five miles south. Locals believed eating aburi-mochi would grant oneself immunity from the terrible plague until next year’s festival came. They also offered them at the shrine to appease the spirits who were thought to be responsible for the epidemic. Hence, over the years, the aburi-mochi at Ichiwa has been associated with good health.

Today, the store is run by the 25th generation of the same family, underscoring their dedication to tradition and aburi-mochi. While the attendant regrettably informed me that the store owner was not in then, she instead explained how Kobori Enshu, a renowned landscaper and tea ceremony master in the seventeenth century, was said to have designed the small garden within. Customers can quietly contemplate life and enjoying eating their aburi-mochi while looking out over the quaint Japanese-style courtyard garden.

Yet keen readers may be wondering, what of the other aburi-mochi store? When I asked the attendant lady, she spoke softly and gestured delicately towards the ladies bustling about on the other side of the street. Kazariya is comparatively “new”, having only come to the aburi-mochi scene in 1656. As Kazariya is situated right across the road from Ichiwa, both operate in direct competition to attract shrine goers who amble out of Imamiya Shrine’s east gate. They will be greeted with cries of “okoshi-yasu!” (welcome) as the ladies on both sides call out to their potential customers in Kyoto dialect.

A plate of aburi-mochi at Ichiwa costs ¥500 while three portions for take-away cost ¥1,500. Whether it be Imamiya Shrine, an old rivalry or the fascinating history behind traditional Ichiwa that has become your reason for visiting, don’t forget to close your eyes and savour the taste of that one last aburi-mochi skewer! 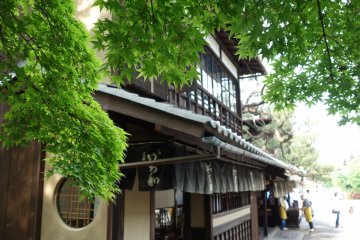 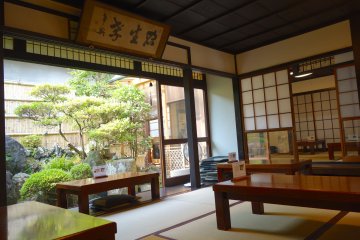 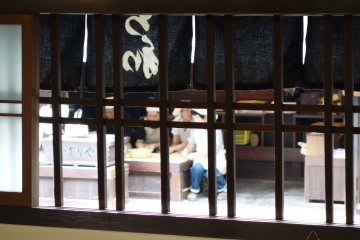 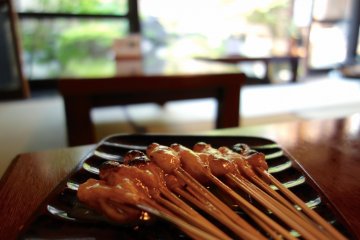 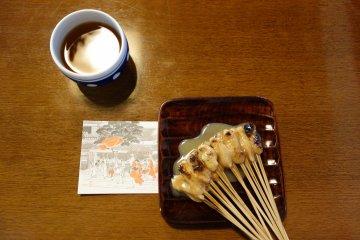 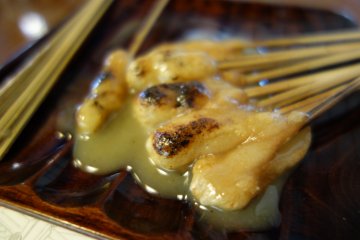 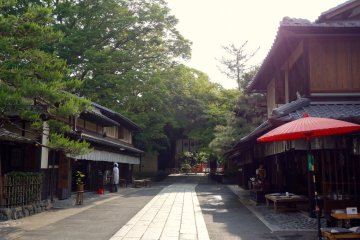 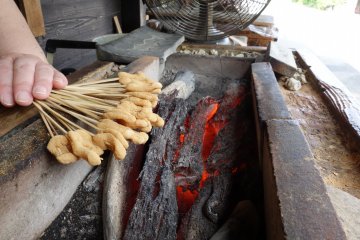