Before Ise, there was Motoise. (Photo: Bonson Lam)

Commemorating the origins of Japan

Are we connected on a deeper level? Does mother nature shed a tear? Since ancient times, people have looked around them with wonder, and in Japan, their thoughts are often grouped under the umbrella loosely called Shinto. Shinto is so deeply connected with nature, and so much so that for millennia, priests and priestesses have tapped into the rhythms of nature, calling out for healing or in anger.

The Japanese have a respectful relationship with nature, a deep connection with the oceans and mountains as if they are calling out to them. This rich tradition gives rise to myths and legends, of stories like Spirited Away, where trees and foxes take on human qualities.

More than many places, Japan is a land of fire, water, and air, their animated nature giving rise to its personification, in the form of the wind and fire spirits.

Before Ise, there was Motoise. Motoise, or the origin of Ise, tells the story of the tumultuous founding of Japan, long before the Ise took over as the Grand Shrine of Japan.

According to the ancient chronicles, the turbulent deities of the sun and moon gave birth to Japan, before leaving its inhabitants to look after the archipelago that have been plucked from the deep. The priests sought connections between the celestial and mortal, conveying the voice of the unseen. They translate its voice into human words. The verdant forests and sandbars that surround Motoise Shrine breathe to the rhythm of this creation story, and so the pilgrimage over the sandbars of Amanohashidate, is just as important as the shrine visit.

In a time when people are uncertain about the future, and what the forces of nature have in store, let us drink deep from their sense of reverence, of being one with the land and the seas.

In Japan, the earliest shrines were just sacred nature spots that are marked off with a rope. Even today, in places like Sefa Utaki, there are areas that are left to their natural state. Hyakuna Garan, which means 100 natural cathedrals, is an attempt to discover the divine in a place that is entirely natural, devoid of any human distractions. There is healing in the forests and mountains, whether you are forest bathing, or soaking in a natural hot spring, or in the waters of the sea.

This shrine today is a place to be still, and be surrounded by the elements of nature, fire, earth, and air - elements represented in the sun, rocks, and trees. The trees are an expression of air, vessels that give oxygen to the world. It is no wonder that washi, which enshrines the veins of the mulberry tree, is an expression of reverence that the Japanese have for nature.

Take the old school restored Matsu train from Fukuychiyama, departing several times daily. From Motoise Shrine, why not continue your way to the sea, where you can stay at the boathouses that hug the shores of Ine Bay. 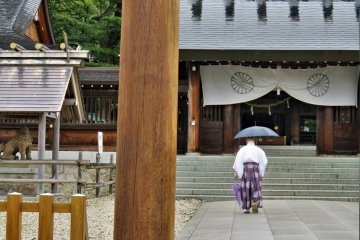 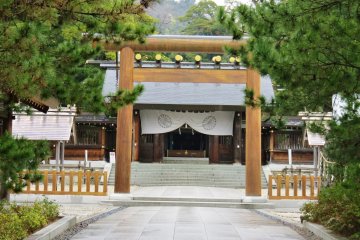 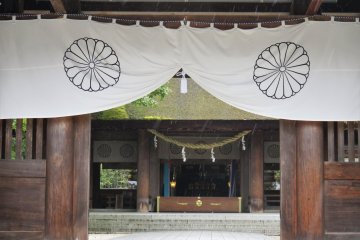 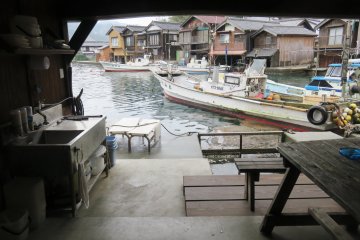