Birdwatching on the Kamogawa

Birds like Great Egrets have been part of Japanese folklore for centuries. Noted for their grace, their large wings flap slowly, giving them strength and dignity. Many kinds of applied arts, from screens to textile designs, take their cues from Egrets, Herons, and of course the Crane, a symbol of long life.

Have you ever wanted to fly like a bird, soaring over the skies of Kyoto? Or find out the secret of their speed and stability? When the designers of the Shinkansen train looked for inspiration, they found it in the form of the Kingfisher bird. Its long streamlined beak breaks the pressure of diving into water, giving it silence and stability, two traits that the trains require as it exits tunnels at high speed. If it wasn’t for the kingfisher design, the train’s sonic boom could be heard for miles.

Repeat visitors and residents of Kyoto may have seen more birds like the Egret return recently, especially on the grass reed shores of the Kamo River. Compared with other species, Egrets are often among the first species to settle and nest, so seeing them is a sign that birdlife is seeing renewed confidence in Kyoto. Like many Salarymen, the male Egret builds the nest first before starting a family with his partner. He also likes to change his nest each year, though the decoration may be left for the fairer sex to decide.

During the warmer months, many young people like to sit on the shores, watching nature and humanity take their cue from each other in the seasons of life. Whether you are just listening to the gentle stream, or hopping across the stone laden causeway, the river is a celebration of life. It is like you can forget about your worries and be a child again.

In nearby Kiyamachi on the Takase canal, you can grab a window seat at the Ryoriya Otaya Restaurant, and watch these birds at play. It is a sublime sight in the evening, and sometimes you wonder whether you are watching Japanese theater or not, such is the beauty of this interaction between nature and the graceful lantern lit wooden houses that line the canal. 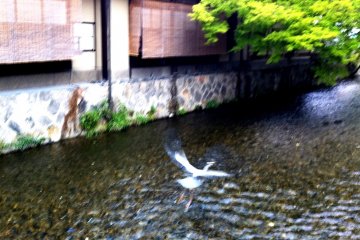 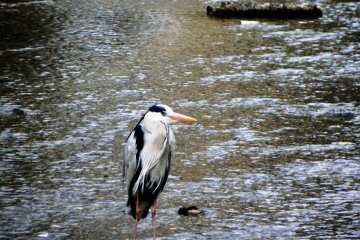 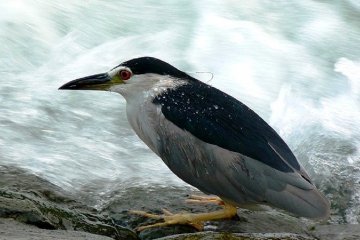 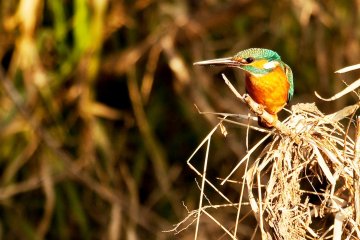 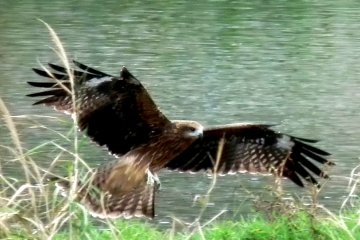 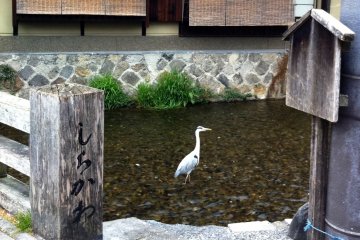