As you might know, there was a blue-eyed samurai in Japan in the early 17th century. His name was William Adams. But not many people know that there was already an African samurai 20 years before Adams. This samurai, who worked under prominent Japanese warlord, Oda Nobunaga, (1534-1582), came to Japan in 1579. And he had the unique opportunity of serving Nobunaga for a year and a half. He fought extremely bravely for Nobunaga at the incident of Honno-ji Temple in 1582. The man received the Japanese name Yasuke from his lord, Nobunaga. Sadly, no records exist of his real name, although a 2013 TV program, Discovery of the World's Mysteries (世界ふしぎ発見), stated that Yasuke was perhaps a Makua from Mozambique named Yasufe.

In 1579, a Jesuit missionary inspector, Alessandro Valignano (1539-1606), visited Japan. Before coming to Japan, Valignano stopped by the Portuguese possession in eastern Africa (today’s Mozambique) and then went to Goa, India. In those days, the Jesuits had an important Asia-focused base in Goa. When Valignano headed to Japan for his mission, he brought a highly trusted black servant with him.

In 1581, Valignano entered Kyoto (the capital of Japan at that time) to observe firsthand the power of the nation. His party stayed at Nanban-ji Temple, just one block away from Honno-ji Temple (see photo #12). Nanban-ji Temple was actually a church (it doesn’t exist today) but the Japanese understood it to be a Christian Temple, and called it a foreign (Nanban) temple. The building was a mixture of European and Japanese styles. Jesuit missionaries evangelized with this temple as their base. Valignano was granted an audience with Nobunaga at Honno-ji Temple where Nobunaga usually stayed when he was in Kyoto.

A rumor spread quickly that a black man was in Kyoto. And soon huge numbers of people flocked into Nanban-ji to see the man with their own eyes. This was the first time for most Japanese to see a black man and they were all extremely curious, including Nobunaga himself. So Nobunaga sent a messenger to Nanban-ji, saying that he would really like to meet THE MAN as soon as possible! Accepting Nobunaga’s request, Valignano took Yasuke with him to Honno-ji Temple on that very day (Feb. 25, 1581).

Nobunaga observed Yasuke intently. At first, he couldn’t believe that the color of the man's skin was natural. So, Nobunaga ordered his retainers to wash Yasuke’s body. The more they scrubbed him, the more his body shined black. Nobunaga was astounded.

According to the description of a Daimyo (powerful local lord) who was there, the black man from a foreign country was 182.4 cm tall and had a beautiful black body just like charcoal. Nobunaga's official record, “Shincho Koki”, said that the black man was 26-27 years old, and as powerful as 10 men. And he could even speak a few words of Japanese.

Nobunaga liked the man and gave him a Japanese name, Yasuke, so as to make him his retainer. Valignano accepted Nobunaga’s request and Yasuke officially became a samurai. It meant that Yasuke was provided with a sword, house, samurai clothing and a salary from Nobunaga.

The incident of Honno-ji Temple occurred on June 2, 1582. This incident was shocking in that Nobunaga’s vassal Akechi Mitsuhide betrayed and attacked him.

On the morning of June 2, Nobunaga was washing his face and drying himself when Akechi’s assassin sneaked into Honno-ji and shot an arrow into Nobunaga’s back. Nobunaga pulled the arrow out by himself. He got back inside and took a bow in his hand. He fought for a while. But his elbow was then wounded. He understood that he was about to die, so he closed the sliding doors gently and never came out again. Some people who were there said that he committed hara-kiri, while others said he started a fire and burnt himself to death, so that his enemies would not see him die.

Yasuke was with Nobunaga on that day. At first, he fought to protect Nobunaga, and after Nobunaga died, he rushed into Nijo Palace (it does not exist today) where Nobunaga’s son, Nobutada, was staying. Yasuke fought bravely. But eventually he was captured by Akechi.

Looking at Yasuke, Akechi said: Yasuke can not be held accountable because he is not Japanese. (Like any outsider, he was considered to be almost a beast.) So, bring him back to the church (Nanban-ji Temple)!” There is an opinion that Akechi actually admired Yasuke and used this as an excuse to release him.

Unfortunately, no records can be found about Yasuke after he was sent back to Nanban-ji Temple.

The TV program mentioned above found that people in Mozambique wear clothes quite similar to the Japanese kimono. Yasuke might have gone back to his home country after that and brought some kimonos with him.

Honno-ji Temple moved its location after this incident. Today’s Honno-ji is downtown, surrounded by modern buildings. It is just a 2-minute-walk from the Kyoto Shiyakusho-mae subway station.

The main hall is open to the public and you can move around the inside freely, but please remember to show a quiet respect for the Buddhist altar. When I went there, no one was there. I opened the sliding door, and sat on the floor for a while. Then I prayed for the repose of Nobunaga and his brave African retainer, Yasuke. Nobunaga’s memorial grave sits unobtrusively in the temple's inner grounds, behind the main hall.

The original location of Honno-ji Temple was about 1 km west of the current temple. The spot has completely changed and there is just a small shop focusing on Nobunaga there. The shop, called “Shincho Saryo”, has a restaurant, café, and exhibition room related to Nobunaga. And interestingly, there is a memorial stone downstairs, modeled after “Bon-san.” Bon-san was a large stone kept at Nobunaga’s Azuchi-jo Castle in Shiga (it doesn’t exist today). The shopkeeper said that people who really love Nobunaga get together at this shop and grieve for his soul. Bon-san was actually a symbol of Nobunaga in those days. When Nobunaga was out of the castle, retainers thought Bon-san was there in place of him, and so they carried out their duties as if he was there.

By the way, one of the creators/designers of this shop is a Japanese manga artist, Tetsuo Hara (known for the series Fist of the North Star). He is now working on a new series about Nobunaga. If you are interested in Nobunaga, please check it!

*An index of this entire Foreign Footsteps in Japan series can be seen here. 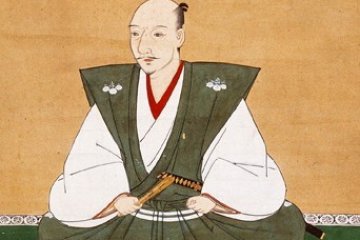 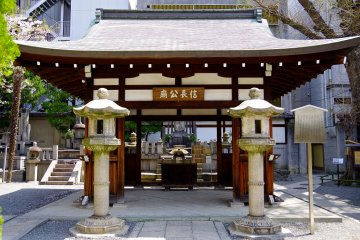 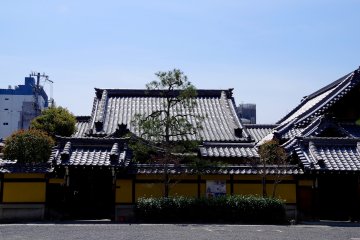 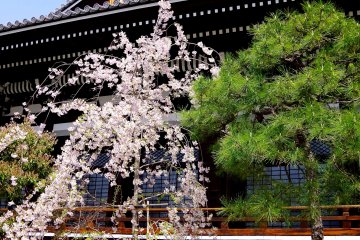 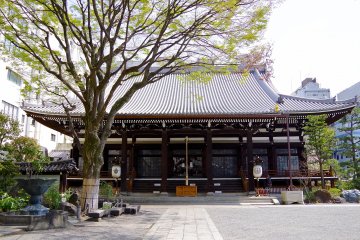 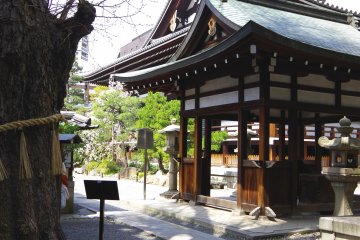 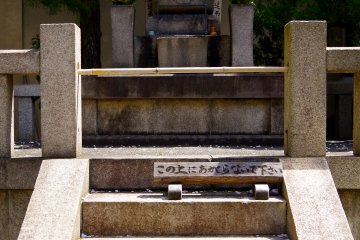 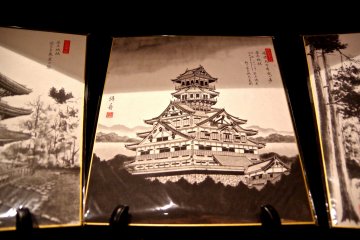 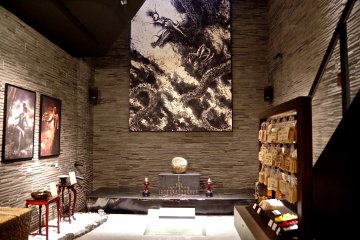 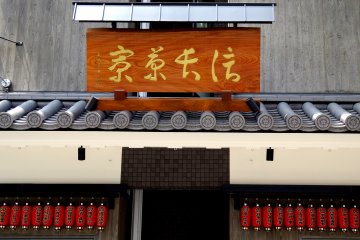 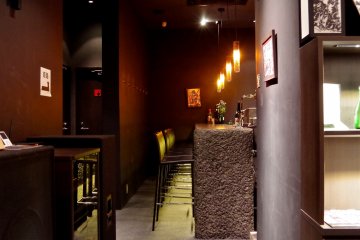 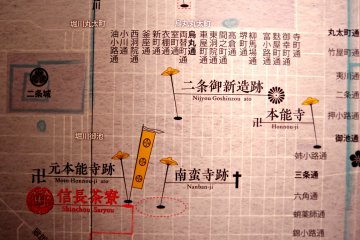