Wooden boats and songs of the oarsmen

Boating has been a Kyoto pastime since the Tale of Genji a thousand years ago, with the nobility enjoying a sunny afternoon on the river, drinking sake and reciting poetry to the sound of flute and koto stringed instruments. In the Edo Period 200 years ago, boats with tatami mats and a roof called Yakatabune were popular. These days, you can take off your shoes and recreate this gentle pastime, though the flutes and poetry have been replaced by the Japanese banter and commentary from the expert oarsmen, some in their sixties.

The Hozu river cruise, or hozugawa kudari takes place several times a day from Kameoka to Arashiyama, the latter being less than 30 minutes from the crowds at JR Kyoto Station. Most people come here from Osaka or Kyoto on a day trip, however, you can stay overnight at one of several excellent ryokans nearby at Kameoka Onsen.

In the fall the cruise is hugely popular as the forests take on a blaze of red color. On the other hand, in winter the boats are heated, and the crowds noticeably absent, allowing you to take in the crisp silence of the colder months. In spring you may see cherry blossoms, and in summer the verdant green scenery and river breezes are a perfect anecdote to the heat of Kyoto City. After the rainy period in June the river levels are a little higher, though the chances of being drenched are pretty low. If it does rain heavily or there is a typhoon, the cruises will be canceled.

Once you depart from Kameoka town, the scenery takes a dramatic turn as you encounter the steep forest gorges on either side. For bird watchers, there is plenty of wildlife here, with sightings of eagles, kingfishers, ducks and cormorants expertly spotted by the oarsmen. High above the waterline, the Torokko scenic train weaves its way through various tunnels in the gorge, and in parts is close enough for you to wave to the passengers, all happy and waiting in anticipation of their next turn on their scenic trip up to Kameoka.

It is hard to believe that until 1945, this river was full of commercial activity. In the seventeenth century, Suminokura Ryoi, a Kyoto merchant, wasted no expense in clearing the obstacles on the river, allowing loggers to ship logs on wooden barges from the forests of Kyoto prefecture to Osaka for sale. The quality of this wood from the nearby Tanba district was well sought after, with both Osaka and Fushimi Castles making the most of this supply. Overland trucks eventually took over the task of transporting timber in the twentieth century, allowing the river to revert to its peaceful state.

There are cafes and convenience stores in Kameoka if you wish to have a light lunch there.

Generally these boats depart hourly, though on weekends and busy periods it will depart more frequently, as soon as there are 20 people on board. While there are no seats on the boat, the cloth floor is reasonably comfortable, though you may wish to bring a cushion. You can bring your own snacks; otherwise a food boat comes alongside towards Arashiyama during the peak tourist seasons. The boat ride takes two hours from Kameoka to Arashiyama, winding its way through the 16 kilometer course.

The easiest way to get to the pier at Kameoka is walk eight minutes east north east towards the river from JR Kameoka Station, and the pier is next to the highway bridge heading north across the river. If you come up by the Scenic Torokko Train, it is a 15 minute bus ride from the Torokko Kameoka Station. Kameoka itself is 31 minutes from Kyoto Station, and I recommend that you leave Kyoto by 1130 am at the latest if you are going on a day trip. 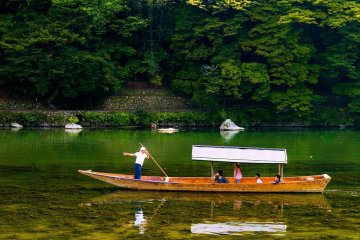 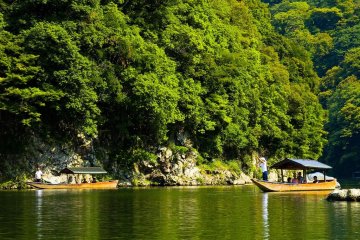 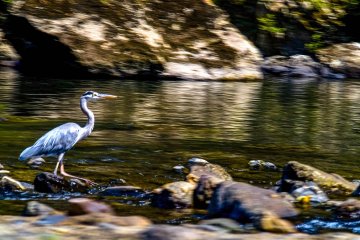