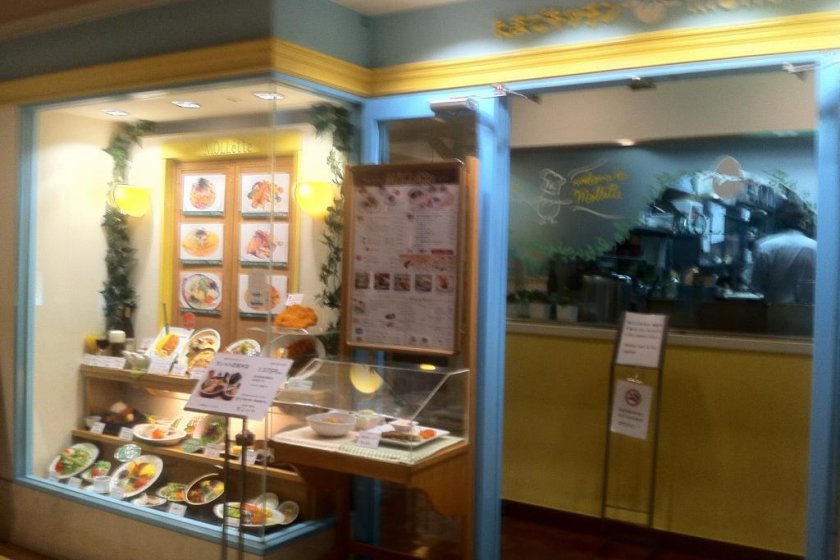 A cautionary tale of eggs, dating, and maid cafes

Window Displays are almost as delicious as the real thing

In the movie "Ghost Pub" (Watanabe Takayoshi 1994), one of the more charming moments was when the little boy came with his family to the izakaya, or Japanese style pub, to have "omu-rice", or omelet rice. As the soft golden yellow omelet gave warmth to the tomato flavored rice, so the young boy was reassured that all was well in his world and it took his mind away from his mother's struggle with the loan shark.

On a cold winter's night, with no loan shark to speak of, I retreated to Molette egg café, high above the glass cathedral that is otherwise known as JR Kyoto Station. The omelet was paper thin, as it was meant to be, with some fantastic gravy sauce that you or the waitress can pour on top of the omelet just before eating.

Omurice, or omu-raisu, is what Japanese called "yoshoku", or Western influenced cooking. Over time it has taken Japanese characteristics. Firstly, the main ingredient is rice, albeit served in an untraditional stir fried style. The western influence is more in the tomato ketchup served with the dish. Like Ochazuke, another comfort food, Omurice can use leftover cooked rice, making it popular with home cooks. In the fried rice mixture, there are often chicken, ham, onions or red pepper pieces thrown in.

Secondly, the dish, like curry rice is pretty much the same throughout the four seasons, unlike a lot of “washoku”, or Japanese influenced cooking.

Speaking of curry rice, Molette should be nominated for the academy award for casting omelet for best supporting actor. Here they pair omelet with curry rice, tempura, hamburger mince steak, as well as Tonkatsu, the Japanese equivalent of pork schnitzel. So if your appetite tonight is for some mainstream Japanese café food, you can’t go wrong here.

For some reason, Omurice is often associated with maid cafes. Maybe it is because in several animes, the heroine wants to show her love, by writing a message on the omelet using the tomato ketchup. Ah, how eggs became the glue that hold relationships together! On the other hand, other anime characters show messages of revenge on the omelet rice.

At Molette, there are no maids to speak of, though the uniformed waitresses are welcoming without being overly friendly, and therefore I can safely inform you that it is safe for a date night. An inexpensive date night too, with meals starting from 800 yen, and set courses including soup for about 1400 yen. Looking around on a weeknight at 6pm, there are more young office women than couples on a date, so no need to fear the "Valentine Day's syndrome" where every table is taken by couples, each nervously eyeing other couples to see if they are doing anything different.

So all things considered Molette is a safe place to take your date, friend or family. By the way, this cafe doesn't have any candle lights or cigarette smoke either, just in case your kid is a pyromaniac. Everyone can have a happy ending in this omelet story, even parents, with baby seats and the kids menu a specialty here. 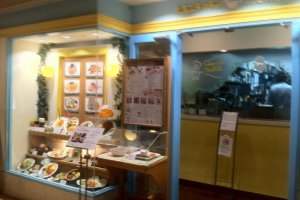 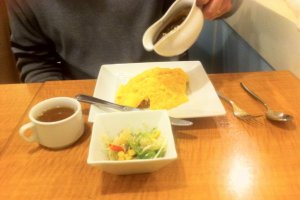 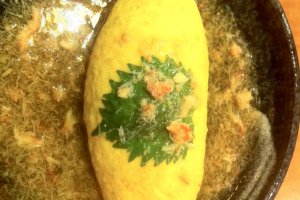 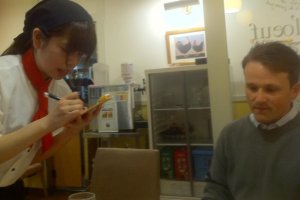 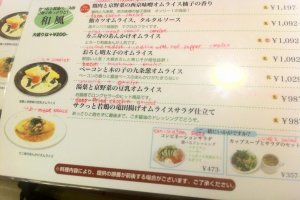 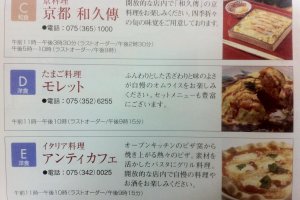