There are three top internationally famous brands of beef from Japan, Kobe beef, Omi, or Yonezawa beef, and Matsusaka Beef. Of the three, Matsusaka beef typically commands higher prices when offered for sale, and according to many Japanese is of a superior quality than it’s rivals. One of the reasons is because Matsusaka beef is raised from specially pampered, “Japanese Black” virgin heifers or Kuro Wagyu cows. Only about 25,000 animals are slaughtered each year and most of that is auctioned on the hoof, adding to both it’s rarity and cost. The beef itself is famed for it’s soft texture, rich, developed taste, and for it’s evenly marbled, high-ratio fat distribution.

Matsusaka beef originates in the pristine, quiet Matsusaka region of Mie Prefecture, located between the mountain fed Kumozu River in the north and the Miyagawa River in the south.

To produce a better quality of beef, the black cows are fed copious amounts of ground wheat, barley, soy pulp, and plentiful beer to increase their appetites. They are treated to regular sunlight baths and after being sprayed with shochu, an alcoholic beverage made from fermented potato, are massaged with special straw brushes to increase blood circulation, and are walked daily. It’s been said that the cows are also entertained with soothing music piped into their stables to calm them! The secret to Matsusaka Beefs’ flavour is due to the cows being kept until about three years of age, whereas most beef cattle worldwide are slaughtered around the 18 month mark.

The prized meat sells for around 5,000 yen per 100 grams, making it some of the world’s most expensive beef! Enjoyed as Sukuyaki, Shabu Shabu and as steaks. We'll tell you where to eat it here on Japan Tourist!

A cow fed on beer and massaged regularly. That sounds pretty good! I’d not only like to try one, I think I’d like to BE one! 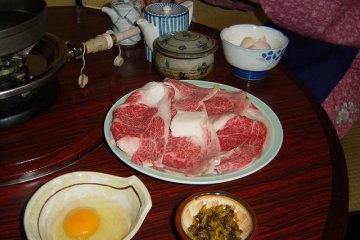 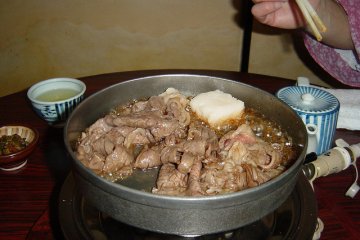