In major cities there are literally thousands of establishments to find a decent meal. Maybe there are hundreds to find a good meal at a fair price. Then there are possibly just dozens where you can find a meal with an experience. Oshu Fish Market Izakaya Robata ​is one such gem (*note this is the closest English translation I came up with. Japanese name: 奥州魚河岸酒屋 天海のろばた 本店). Located in the capital of Miyagi inside the Haabu Sendai building on the 6th floor (ハーブ仙台6F), the restaurant is just a five minute walk from the West exit of Sendai station. Here you can discover Sendai’s forgotten cuisine.

Oshu Fish Market Izakaya Robata is a robata (sometimes referred to as robatayaki) restaurant. This style of cooking is best represented by grilling seafood over an open fire and serving it via fishing paddle. A page in the restaurant’s menu (in Japanese) informs patrons of robata style cuisine history. First of all the cooking style started in Sendai. This comes as a shock to most Japanese people as most have no idea—even those living in Sendai! When people think robata, they often think of a town in Hokkaido where the dish became very popular but did not actually originate. The style of cooking was developed by hungry fishermen with few tools or utensils to cook. They grilled what they caught at sea over an open fire and passed it along using their boat paddles. The information from the menu states that in the 1940s there were over 10,000 robata restaurants nationwide. For one reason or another, the number of authentic robata restaurants (where the food is cooked and served right in front of you) is but a small fraction of its former glory. Perhaps Japanese eating habits or the extra time and money it costs to run a robata are to blame. Even the chef at this restaurant said using the paddle to serve every little item can get annoying or tiresome. But it is part of the experience. If he notices that’s what you came for he will talk your ear off about robata and even let you hold the paddle for a picture!!

When the elevator doors open, you are greeted with a big smile. The restaurant is lively with people chatting away, the smell of grilled food drifting in the air, and postwar Japanese music playing over the speakers. I was greeted by name when I walked in because I had made a reservation. Despite it being a Monday evening, I only saw a few seats free, and the staff told me it was a slow night! This is an eatery where a reservation is a must. The restaurant has 88 seats and can accommodate people at the counters, tables, or tatami mat seating for larger groups. The restaurant rarely has foreigners, so the staff went out of their way to make sure I was comfortable and to practice the very few words of English they know. One staff member insisted I was French, but I am still not sure why. Maybe he wanted to practice his French with me. I brushed it off, ordered some drinks and then the night started getting more fun.

My party of two sat at the counter, probably the best spot to be if you have not experienced robata first hand. The restaurant has a great selection of beers, wine, cocktails, and sake. Many of the customers are locals and this is their local watering hole. The Japanese menu you are given has a wood cover with an inside description telling about the history of robata cooking. It also of course lists the foods, but sadly with just a few pictures. However, pictures along the walls advertise the tasty specials, otherwise the chef is kind enough to make some recommendations.

Most entrées consist of a platter with the main course fish, some other seafood, such as oyster with sides of meat (intestines…yummy) kabobs or kebabs, and a small salad or edamame beans. The entrées consist of large portions. As such, with an additional appetizer you should easily be able satisfy two people. Entrées run from 2000 to 3000 yen. You may choose to have some of the seafood raw or cooked. I had mine cooked to get the hint of smoky flavor that robata-cooked seafood is known for. Our food came delivered via paddle. Similar to the Japanese custom of pouring drinks for one another, I believe having the food delivered in this intimate way, which requires balance and coordination from both parties, makes a bond between two people; in this case the chef and the customer. From that moment we felt more at home and struck up a conversation with the chef that went on and off between his orders for the rest of the night. The food of course was absolutely amazing. Juicy fish, grilled meat with just the right amount of salt, and a side salad we ordered that had freshness you could taste. We washed down each and every bite with beer and plum wine, my personal favorite. Just like barbecue in my former home of the US, barbecued seafood is complemented with a bit of alcohol. No worries since the main station is just a five minute stumble down the boulevard.

For a shared entrée, a hefty side salad, and a few drinks you could expect the night costing about 5000-6000 yen. Keep in mind you are paying for the food, the service, the atmosphere, and the cultural experience. While robata is not famous in Sendai nowadays, it did originate here and is part of the city’s rich history. Why don’t you stop by and let your taste buds in on one of Sendai’s best kept secret cuisines? 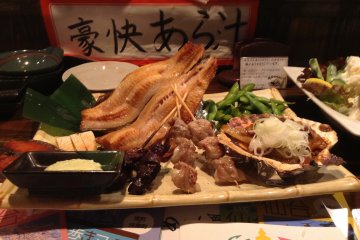 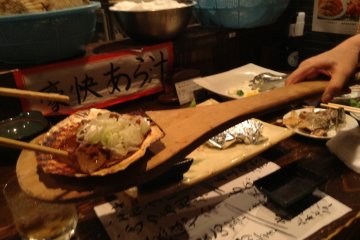 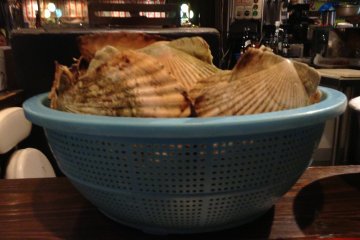 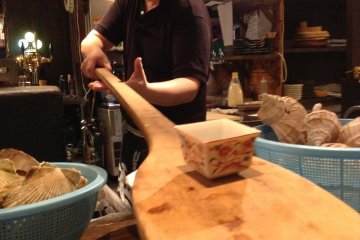 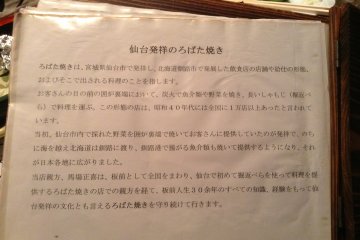 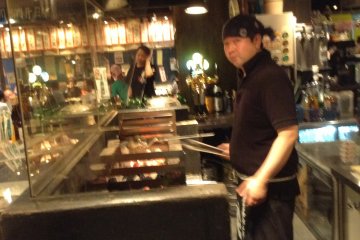