Nothing beats a walk in a neighborhood of peaceful, historic temples—unless they are overrun with tourists. Sendai will likely never have an “overtourism” problem outside major festivals like Tanabata. Exploring temples in Sendai really is something special as you will almost always be the only person there, certainly the only non-Japanese person. When visiting Sendai, most temple-seekers head to the Kitayama area, home to such attractions as Aoba Shrine where the spirit of Date Masamune is enshrined, and Rinno-ji Temple, home to the most beautiful temple garden in the city (access JR or subway, Kitayama Station and 10-minute walk). It is worth a visit, but so too is the little advertised Shintera neighborhood, adjacent Renbo neighborhood, and surrounding areas located right behind Sendai Station.

When Date Masamune founded Sendai and built his castle in 1600, most temples were previously located or soon built in two areas. One was “Renbo” which means “related to monks” (連坊:坊が連なる), and the other Mototera-koji, meaning “Old Temple Lane” (元寺小路). The neighborhood is called “Old Temple” because most of the temples were relocated to the present-day east side of Sendai Station to make room for the expanding castle town. This neighborhood is called, “Shintera” (新寺) or “New Temple”, and is located next to Renbo. This history explains why there are streets or districts west of Sendai Station that end in the words “ji”, “tera” or “dera”, and “in” which mean “temple” but there are usually no temples there anymore. For example, Jozenji-dori avenue, Kozenji-dori avenue, and Kakyoin neighborhood.

In the neighborhoods of Shintera and Renbo, you’ll find a mix of old and “new” temples mostly ranging from 300 to 500 years old. Since this area of Sendai was not bombed during World War 2, all the 45 or so temples remain in some form. There are even some remains or parts of original structures which are centuries old. The area is perfect for a walk, jog, or cycle (using the city’s rental cycle service “Date Bike”).

While each temple has its own charm, here are a few must-visit recommendations from a local:

One of the closest major temples next to Sendai Station, this is a perfect first destination. The original temple called Daisen-ji (大仙寺) is said to have been founded by disciples of Nichiren (1222-1282), founder of the Nichiren sect of Buddhism, in 1295. Date Masamune is said to have won many battles after praying here, so he renamed it Zensho-ji (全勝寺) (“Complete Victory Temple”). It eventually changed to its current name.

The temple has always been located here, though its precincts used to be much larger with many smaller attached temples, three of which still remain. At its peak it had 100 monks living and working in the facilities. It has been rebuilt many times after being burned down by fires. The impressive pagoda looks ancient, but was actually built in 2003. There is a monument and temple dedicated to Mizawa Hatsuko, the wife of the Date clan’s 3rd lord Tsunamura/mother of the 4th leader Tsunamura. In fact, Mizawa Hatsuko, often known as Masaoka, the character in a popular kabuki play she inspired, was essential to preserving the Date clan through a family feud known as the “Date Disturbance.”

This is a Soto sect temple, originally constructed in Fukushima City, Fukushima, relocated to Yonezawa, Yamagata, brought with Date Masamune when he moved to Iwadeyama (northern Miyagi), and finally transferred to Sendai (there are several of these “moving” shrines and temples in Sendai). You’ll find many typical temple mainstays such as Nio guardians inside the temple gate, jizo and kannon Buddhist statues, and a small garden. There is also a statue of Benzaiten enshrined here, said to date back to 1854 (before the temple was here). This marks one of seven locations for Sendai’s Seven Lucky Gods Pilgrimage.

This is a Soto sect temple in Renbo neighborhood constructed by Date Hisamune (1453-1514), ancestor of the Date clan, in the Date District of Fukushima during the Kansho era (1460-66). (FYI the Date clan is named after the region, not vice versa). It was moved north to Marumori in southern Miyagi, before finally being relocated here in 1602.

In addition to the beautiful main temple building with intricate roof design (viewed best from the side street) and lovely sand garden, there are several features which make this temple worthwhile. Several notable people are buried in the graveyard, such as the 3rd mayor of Sendai, two female literary figures from the Edo period, and the Date Masamune’s 3rd child, 2nd son with his legal wife (6th child when including concubines!). The temple gate is the former gate of Wakabayashi Castle (Masamune’s retirement castle, where Miyagi Prison now stands). It was donated by the Date family. The temple is also a famous cherry blossom viewing spot.

Lastly, you’ll find a Kannon goddess of mercy statue here. Sendai is one of many cities across Japan that has a 33 Kannon pilgrimage. So there are 33 of these statues around Sendai, this being #23. It is strange to see one here because kannon are associated with the Shingon Buddhist sect, not Soto. A temple located about a 10 minute walk away was demolished in the Meiji era to make room for a junior high/high school, thus the statue was accepted to be housed here.

Tsutsujigaoka Tenmangu is one of many Tenmangu shrines across Japan. This one was relocated here by the 4th lord of the Date Clan, Date Tsunamura, in 1667. People come to pray to the enshrined deity Sugawara Michizane for success in academics and politics. The Chinese-style gate is a city registered cultural asset and a stone monument records a poem by famous haiku poet Matsuo Basho, commemorating his “Narrow Road to the Deep North.” Note, the charming Tsutsujigaoka Park, a famous cherry blossom spot and home to the Museum of History and Folklore, is just a few minutes’ walk away. 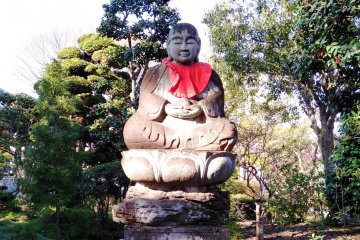 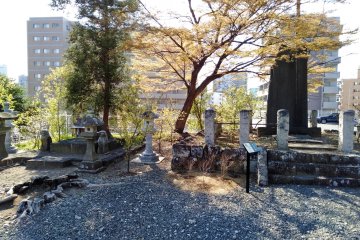 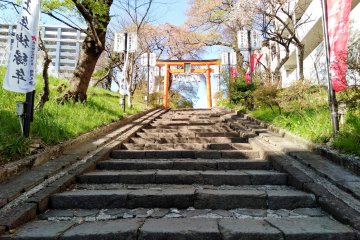 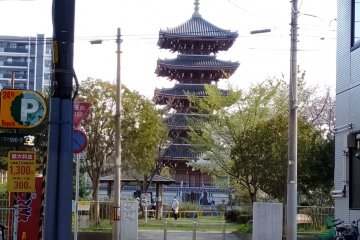 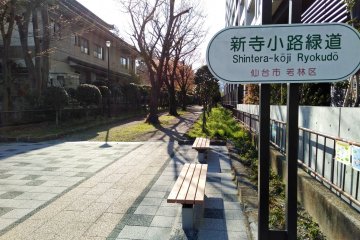 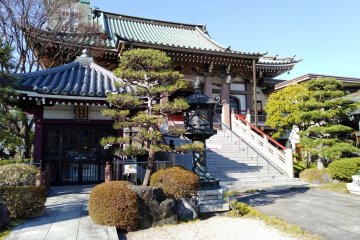 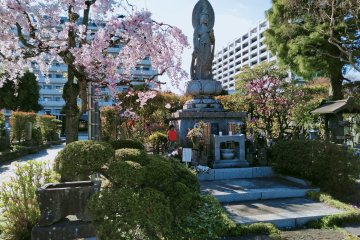 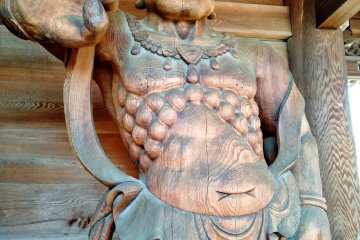 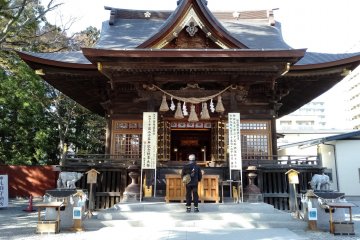