For a bite of Nagasaki’s famous sponge cake

Every region in Japan has its specialty, from miso to melons to mentaiko. Nagasaki, on the shores of western Kyushu, is no different, only its most famous food is actually an import.

Castella (or kasutera, in Romanized Japanese) is a light sponge cake that has its origins in the kitchens of Europe. When the Portuguese first landed in Japan in the mid-1500s, they brought with them a cake called Pão de Castela, or “bread from Castile”, named after a region of central Spain. Whether the cake is originally Spanish or Portuguese is hard to determine, but it wasn’t too long before castella became a staple on the Nagasaki food scene.

The main ingredients for castella are fairly basic – eggs, sugar or honey, flour and a bit of starch. This plain version of sponge cake is the one most often seen in department stores, but if you frequent a specialty shop like Bunmeido, you’ll find a few more high-end cakes on end.

Bunmeido is purportedly Nagasaki’s most famous castella shop, occupying a busy corner near historical Dejima since 1900. While other castella shops in Nagasaki such as Fukusaya predate Bunmeido by a few centuries, the former rose to prominence in the 1960s thanks to a TV commercial. A group of dancing kittens would sing the following jingle:

Castella is number one.

The telephone is number two.

It’s Bunmeido for the 3 o’clock snack.

I’m not entirely sure I get it, but enough people were galvanized by the advertisement that Bunmeido’s sales rocketed upwards and remain fairly high to this day. With that in mind (and with the blind luck of stumbling across Bunmeido on my way to Dejima), I decided to pop in and see what the fuss was about.

The display at Bunmeido is terribly enticing, and I walked away with both a small square of plain sponge cake and a larger offering of their special “peach castella”, a white cake topped with gooey fondant decorated to resemble, what else, a peach. Surprisingly, the peach castella, while delicious, was too large of a portion and far too sweet. My taste buds haven’t been that overwhelmed with sugar in quite a while and I could barely finish the portion. Much better was the small square of sponge cake – moist and perfectly browned on the top, it was exactly the sort of culinary pick-me-up I needed to get through my Nagasaki sightseeing. Bunmeido, I may not understand your advertising, but you sure do know how to bake a cake.

(There are Bunmeido outlets all across Japan, but it’s a real treat to sit down with a cup of tea and a slice of cake in the building where it all began.) 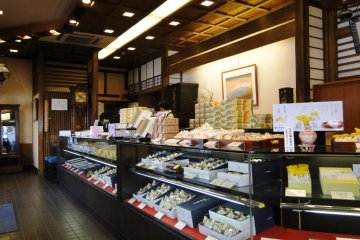 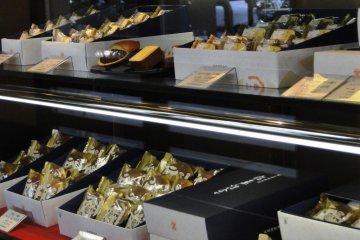 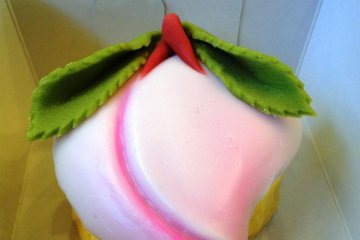 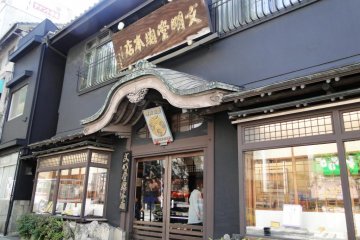