Sasebo burgers the size of your head

There are plenty of places to chow down on Sasebo city's famous burgers, a culinary treat introduced to Nagasaki prefecture by the arrival of the US Navy at the end of World War II. But if you want some of the tastiest - and largest - burgers the town has to offer, make Log Kit your only lunch stop.

Log Kit is easy to spot. Sitting right off the Hirado spur of the Nagasaki expressway, the restaurant's cowboy-themed mascot easily catches drivers' eyes from his prominent place on the restaurant's facade. The dining area itself is up a steep set of stairs and at lunch on most days, a line of hungry diners extends down them and out the door. The Western theme is even more pronounced inside. Servers and chefs sport cowboy hats, random Western paraphernalia is littered around the dining area and I even spotted a small Woody figurine, Disney's most famous cowboy.

In a bit of a departure from your typical sit-down restaurant, diners must order their food at the counter as soon as they enter. (Just be warned - it's a cash only eatery.) Log Kit offers at least a dozen different types of burgers, with toppings ranging from cheese to avocado to bacon and egg. You can also order hot dogs or sandwiches, such as BLTs. There are a number of side dishes, mostly what you'd expect at a burger joint - chicken nuggets, cheese or chili fries and some of the best onion rings I've ever come across in Japan. For kids, there is actually a separate children's meal, but beware that the included burger is the size of a regular burger at nearly any other restaurant in Japan. The kids' set also includes smiley-face potato wheels and a drink of choice.

Log Kit regularly appears in Japanese magazines and occasionally on Japanese television as well. It's one of the city's more famous burger establishments, due in part to the supreme deliciousness of its burgers (no, seriously) but also to the gregarious personality of its female owner. Photos of her and countless happy diners - some of them minor celebrities - adorn the walls of the restaurant.

For drivers, there is a small (and very tight) parking area just next to the restaurant, but it's often easier to park right across the street in the public lot. Log Kit also has a smaller outlet near Sasebo's main port and - for those lucky northern natives - a small satellite stand in Hokkaido. 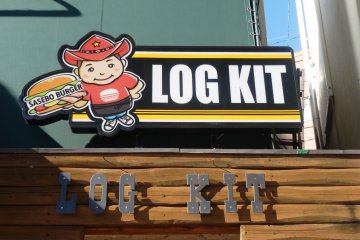 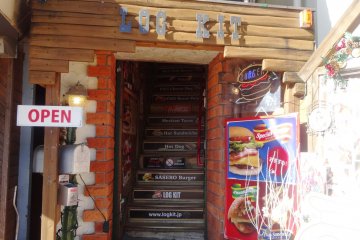 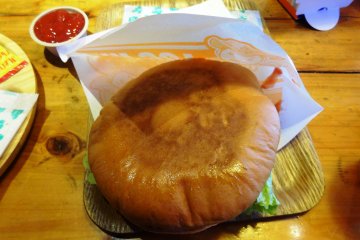 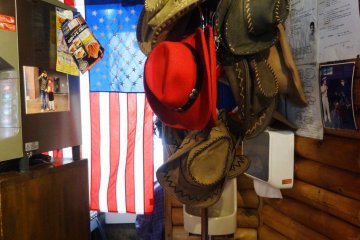