Nozaki Island is part of Ojika town (Nagasaki Prefecture), which consists of 17 islands, with the main island bearing the name of the town. It is a rather small island in the Saikai National Park, with very high mountains, and an interesting history.

When Christianity was introduced to Japan by the arrival of the missionary Francis Xavier in 1549, it was welcomed by the people. As the faith gained unforeseen popularity, an edict was issued by the leaders of Japan in 1587, expelling missionaries, followed by a total ban of the religion by the Tokugawa Shogunate in 1614 century. In the 18th and 19th century, the hidden Christians slowly migrated towards the western islands of Japan, as far from the main administration as possible.

Goto Islands (south of Nozaki Island), Ojika Island and its neighbouring Nozaki Island were some of these places of refuge. In these remote location, hidden Japanese Christians could practice their faith, with little interference from the government’s forces. They lived simple lives in exile for some 250 years.

At the end of the Edo period (1600-1868), foreign ships arrived to Japan and trading posts were established in the country. The Christians believed that their time had come, and proclaimed their belief in Nagasaki. The Meiji government started to uphold the law even stricter, and some 1,500 hidden Christians were arrested and brought to Honshu, where they were tortured and killed.

In the fifth year of Meiji (1873) the government gave in to the international pressure to release the Christians and to lift the ban of the faith. The surviving believers were set free, and some of them returned to Goto, Ojika and Nozaki. After returning home, the inhabitants of the island collected funds from the community and built a small brick church called Nokubi. Together with many other churches, it has been added to the Tentative List of UNESCO World Heritage Sites in 2007 and is waiting for the final decision.

The church still stands in Nozaki, but there is no community anymore. The island was abandoned in 1971. The sad story speaks of a community that had to make a difficult decision after a pregnant mother died because the doctor couldn’t reach the island due to stormy weather. The last remaining six families decided to move to the main island of Ojika, to make sure this kind of tragedy doesn’t happen again.

What remains, are the abandoned and slowly decaying buildings of the main village, the church that has been preserved and is maintained, and the elementary school that has been turned into a camping ground and rentable kitchen and resting place for the visitors. But it is not structures only that were left behind, a large population of wild deer roam the island, the result of a theme-park development that flopped.

There is a long hiking tour to Okinokojima shrine, that is said to have been built in the 8th century. The hike is long, and the path is said to be difficult, thus the authorities recommend not to go without guides.

Visiting the island is an interesting experience, with the wild deer fleeing from the visitors, the remains of a community, the church with its beautiful stained glass windows, and the elementary school, a place to rest.

If one takes the morning ferry, there is enough time to take the long hike to the tip of the island, with the old shrine. According to the Ojika Tourism Association, a guide is needed for the hike, but some locals go by themselves. Still, consultation with the tourism association about the status of the trail is suggested before the trip.

The other possibility is to go with the afternoon ferry, and stay in tents at the camp in the abandoned (and refurbished) elementary school. Again, consultation with the tourism association is strongly recommended.

The other possibility is to go to the island (or return from the island) with a charter boat, that can be arranged at the tourism association. This way, one can decide to spend just enough time to look at the church and wonder around in the abandoned village, without having to wait many hours for the ferry. The cost of the boat ride is considerable, 15,000 Yen, divided between the people on board. 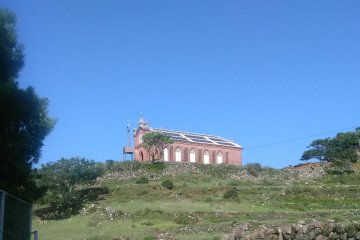 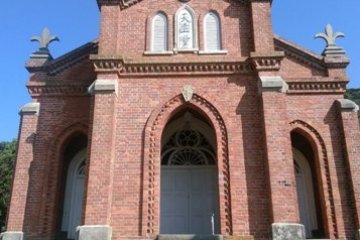 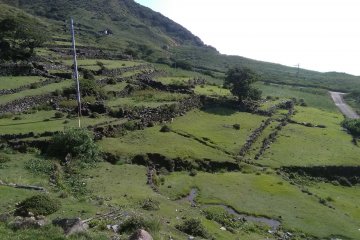 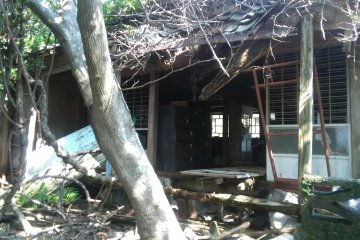 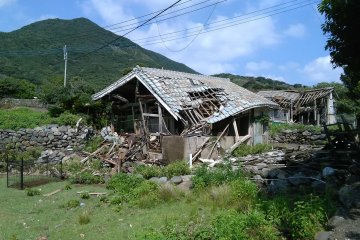