The birthplace of Nagasaki's famous champon

In 1899, Shikairo - a harborside restaurant in Nagasaki - saw an enterprising marketing idea. With scores of Chinese students coming to the city annually to attend Nagasaki's universities, restaurant owner Chin Heijun and his kitchen staff cooked up a dish to appeal to the tastes of the recent arrivals. They called the dish champon, after the Fujian word shapon which means to eat a meal.

Champon is a hearty noodle dish, akin to ramen. The base is made from pork and chicken bones, a bit like the famous tonkotsu (pork bone) ramen from nearby Fukuoka. Pork, vegetables and a few types of seafood - notably octopus and shrimp - are then fried in lard (try not to think about the effect on your cholesterol) before being added to the soup. The dish is then topped with a variety of vegetables, such as shredded cabbage and mung bean sprouts. You may even find the odd piece of colored fishcake added into the mix. It all combines to make a savory and filling meal.

Shikairo offers several sizes of champon but their lunch set - priced at ¥1650 - also includes such favorites as gyoza (meat filled dumplings, usually fried or boiled) and miso soup, along with the standard rice and pickles. Menus are available in both Japanese and English if you're seeking additional sustenance.

While Shikairo has made its way into many tourist guides in multiple languages, service here is quite efficient and staff are used to dealing with the crowds that descend on the restaurant at mealtime. Try to come on a day when the weather is good because on clear days, the views across Nagasaki Bay from the restaurant's picture windows are unparalleled.

If you have a bit of extra time, pop into the tiny champon museum down on the second floor of the building. While not much of the display is signed in English, you can catch the gist of the famous noodle's history from the pictures.

The restaurant is in a large building, flanked by carvings of dragons, just a few steps from the Ouratenshudoshita tram stop. For drivers, there is a parking garage across the street. 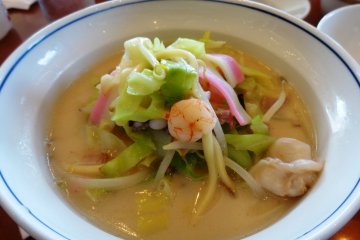 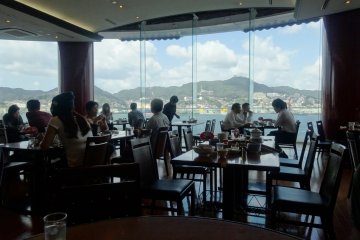 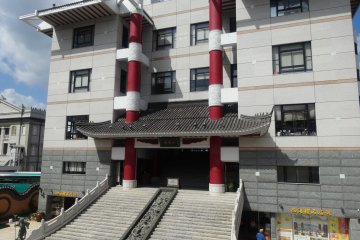