Kaiten-zushi or conveyor belt sushi does not mean quality. Not usually, but I found an exception in Daiki Suisan.

Daiki Suisan is an Osaka based conveyor belt sushi chain with 24 different stores in the Kansai region. Their names and phone numbers all fit on the back of a business card-sized coupon/service ticket. Big enough to be a chain, but not so big that the quality of the product gets lost in the mass of quantity.

Climbing up to ¥150/plate and ¥200/plate were an aburi shio saba (lightly braised and salted mackerel) and katsujime kanpachi (seasonal greater amberjack) respectively. The aburi shio saba was much saltier than I like my sushi (and my cooked fish) to be, but I know many people who enjoy that particular taste. The flavor of the kanpachi was delicate and the feel of the fish in my mouth was another demonstration of its freshness.

When I entered the region of ¥250/plate sushi I hit upon the stand out creative spark that many one off and small conveyor belt sushi chains dream up to distinguish themselves. At Daiki Suisan it was the aburi shio negi salmon (braised salted salmon with green onions and a house sauce). It looked good, it smelled good and there was no holding back the, "Mmmm! That's good," one can't help but utter when their tastebuds have been so tickled. Good things don't come with the highest price.

And speaking of high prices, the highest on Daiki Suisan's menu are ¥500/plate-¥800/plate. I didn't climb that high but I did pay out for salmon toro (fatty salmon belly meat), maguro chu-toro (mid-range fatty tuna) and aburi maguro chu-toro (same as the chu-toro just lightly braised). It was also at this higher price range that I suffered a let down. Though I could tell the fish was fresh, the salmon did not have as pronounced a flavor as I have come to expect salmon to taste, and neither the braised or unbraised toro was as flavorful and tasty as those I've had at other restaurants (some costing less or the same as Daiki Suisan).

Despite the let down of the salmon and tuna toro I would still recommend Daiki Suisan to anyone wanting to eat sushi without busting the bank. The fish was fresh, the restaurant clean and pleasant, and the in-house sushi dish was good. There's at least one more good one and finding it could be delicious! 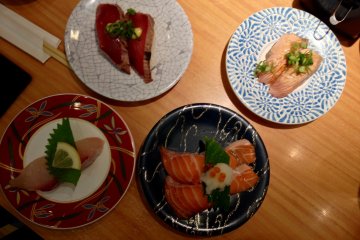 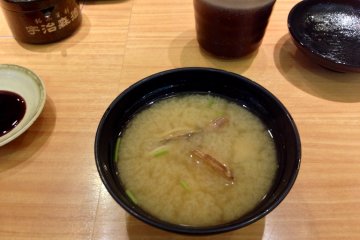 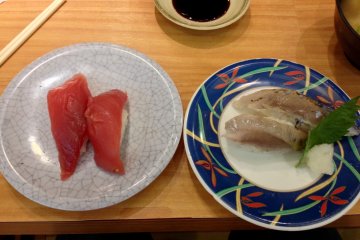 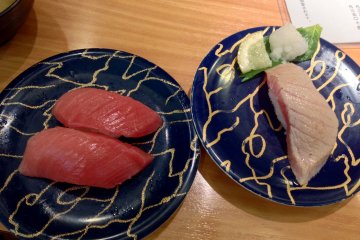