In 710 Emperor Genmei (661-721) selected Nara as the place for Japan’s government by and served as the capital of the nation until 784, after which it was moved to Nagaokakyo in Kyoto. Before moving to Nara, the capital (Fujiwara-kyo) of Japan had been situated in Asuka, 25 kilometers south of Nara. Visitors to Nara who travel to Nara from Osaka traverse a wide open space of green before arriving at Shin Omiya Station, the station immediately before Nara Kintetsu station. The large area you can see from the train is the former site of the Imperial Palace, from the time that the seat of government was in Nara. Sometimes Japanese tourists have commented that it seems strange that a train line will directly cross over a former imperial palace site and there is a train crossing in the middle of the what is a historical site.

The Imperial Palace site was set in a large grid pattern, with a number of straight intersecting avenues, the longest being about 5km in length and at times extending as far east as Todaiji (the Great East temple) now in Nara park. The design of the palace was modeled on Chan'gan, the capital of China during the Tang dynasty and like Chang’an the design of the site was based on a complex system of beliefs and laws of geomancy, which dictated a grid system of streets. Based on this the palace was located at the north end of the grid.  From north to south runs Suzukamon street, that led to the Suzukamon gate. The street extended as far as 4.8 km to the Rajoumon gate,  which was the outer environs of the complex. The Suzukamon gate,  as well as the Tou-in garden was remodeled in 1998 and visitors can see what the original gate looked like. North of the gate there used to be various government offices.  There were no walls surrounding the Heijo site but Nara was the final destination of the Silk Road in Asia and was populated with traders, merchants from India, China as well as Korea. Nara served as the first international and political capital and there was a population of some 100,000 people at the time.

In 2010, one of the main palaces (Daigokuden) where government affairs were conducted was restored to its original condition, costing several billions of yen to complete. Other buildings included the Chodo-in where formal ceremonies were conducted, and the Dairi, the Emperor’s residence. They no longer exist today, but we can still see their footprints even today. At the north east end today you can find the Excavation site exhibition hall where visitors can see opened excavation sites. At the north western end is the Nara  Palace site museum, which contains many relics, photographs and models and maps on display, including wooden tablets that were used for writing on, instead of the more expensive paper.

Anything that was underground or in the foundations was well preserved and from time to time are revealed during ongoing excavations.After the capital was moved to Kyoto at the end of the eighth century the palace was largely abandoned and due to the ravages of time and elements ensured that by the time of the Kamakura Period there was very little left of the buildings more than what can be seen today. Some of the temples around the complex retained their influence, while the palace grounds themselves were used primarily as rice fields. Archaeological excavations still take place at the Heijo Palace site and the relics that have been found in previous excavations can be seen at the historical museum at the site which was declared a UNESCO World Heritage site in 1998.To reach the Heijo palace site take the Kintetsu Nara line to Yamato Saidaiji, get off the train and from the North exit walk about 10-15 minutes or 1km east towards Nara. You will see the large expanse of the park in front of you, and the Nara Palace site museum will be on your left.  Its possible to walk from Shin Omiya station and it takes about 20 minutes on foot. Buses leave from JR Nara and Kintetsu Nara get off at the HeijoKyuseki bus and the trip takes about 10 minutes and costs about 250 yen. The Imperial Audience hall is near the Sakicho bus stop and the Nara Palace site museum is near Nijocho bus stop. 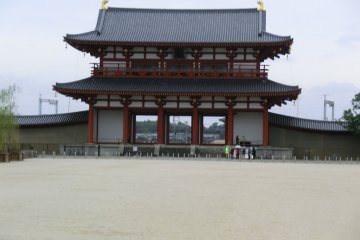 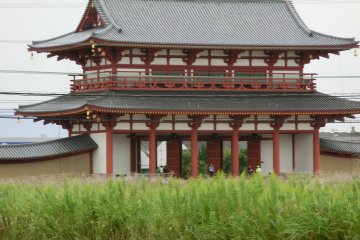