It goes without saying, that the Japanese are well known for introducing different foods from overseas and making them their own by adding splashes of flavor and color, all the wile retaining the original flavor. Until now, my experience of pizza in Japan has been the fast food variety, usually served with thick crusts and loaded with toppings like ham, pineapple, tuna, sweetcorn and even weiner sausage - essentially pizza that bears little resemblance to the Italian original. Italian pizzas are usually very simple, made with a thin crust base, spread with tomato paste and sprinkled with herbs and cheese (Margarita). It came as a pleasant surprise to me to find not only a pizza restaurant quite by accident in my neighborhood, but also one that appears to pride itself on quality, appearance and exquisite taste. PizzaVilla Mago is located just north of the Heijo Palace site, about 1km north of the Daikyokuden Palace and within easy walking distance of Saidaiji (30 minutes or 3km). The restaurant is a little off the beaten track, but easily reachable by bicycle, taxi (or for the energetic) on foot from Shin Omiya or Yamato Saidaiji stations.

Opened in November 2011, it is open for lunch and dinner, has an extensive menu of cakes, teas and coffees, lattes, pasta and pizza dishes. The kitchen has a wood-fired brick oven where the pizzas are cooked, and cakes are on display, as well as clearly displayed on the menu. The décor is very modern and stylish, with a pastel green motif and wooden tables and chairs. The first day, I went for lunch and ordered a caramel ice latte and a matcha (green tea) cake set that came to about 1,000 yen. The service was efficient and the staff were very friendly, though none appeared to be able to speak any English. The cake was delicious. In Japanese, ask for aisu if you want cold drinks, or hotto for hot drinks. I went back this evening to sample their pizza selection as I am a pizza aficionado. There were about half a dozen to choose from, including seafood, Margarita, and vegetable-topped pizza. The pizza I ordered was a Margherita with raw ham and a leafy topping, as well as cheese. The base was fluffy and well-cooked, and the raw ham was plentiful as well as a feast for the eyes. I was still hungry after devouring the pizza, and the waitress mentioned that often women will order a pasta as well as a pizza and still be able to finish both of them. As the pizza had a tomato sauce base, I chose pasta with a white cream sauce with bacon and kinoko, a small, brown legume used in a lot of Japanese cooking. I also ordered some garlic bread, which was two pieces of toasted French bread with a garlic flavored tomato sauce on top. The pasta was superb as the flavors melted in your mouth. Yum!

For dessert, I had a New York cheesecake which was also very nice and had a good balance of flavor. A lot of attention is obviously paid to detail and presentation, and it was always nice to look at before eating.I would thoroughly recommend this restaurant for a unique dining experience. Pizzas are priced from about 1200-1600 yen and pastas are around 850-1200 yen. The restaurant serves Kirin beer by the glass, and they also serve hot and cold tea and coffee, as well as soft drinks. They do not accept credit cards, so be sure to bring plenty of cash with you. You will not be disappointed if you decide to dine at Pizza Villa Mago! 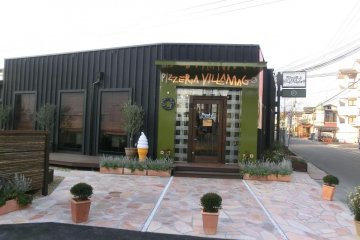 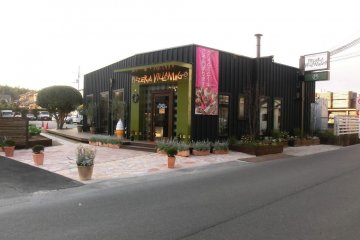 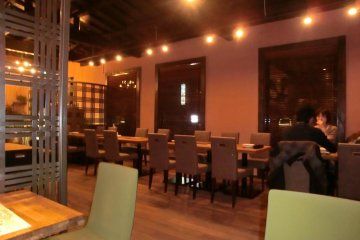 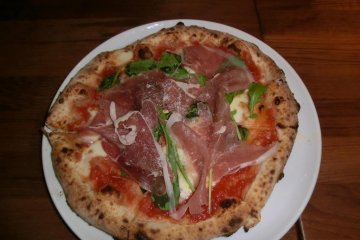 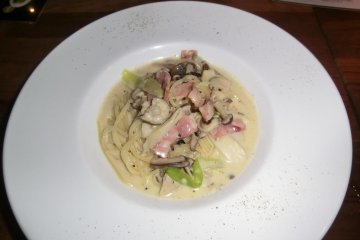 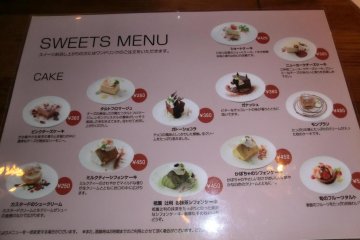